Creating an abstract game is easy. Creating an abstract game worth playing is harder, and getting people to actually play it is harder still, at least for non-commercial projects. Tumbleweed, a recent design by Mike Zapawa, seems to have pulled off this trick, and thus merits a closer look. This article offers a surface-level glance at its rules, behaviour and community; its tactics and strategies will be discussed in the next issue.

Rules and game play
​
Tumbleweed is played on a hexagonal board, typically with eight cells per side. It is generally agreed that the smallest reasonably playable board size is five cells per side, and the largest is eleven.  ​

In Figure 1, the newly placed White stack on D7 has two pieces because it can “see” two friendly stacks on D6 and I12. (Black-bordered stacks indicate the last move.) 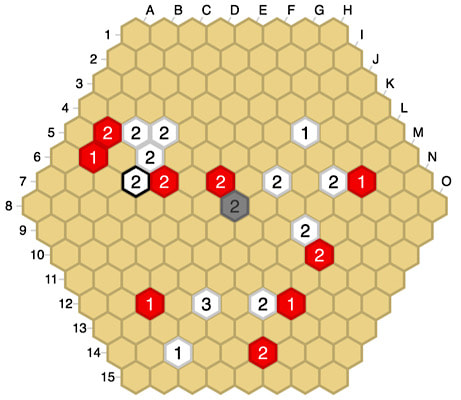 In Figure 2, Red’s 2-stack on F4 could “see” three enemies, so it was vulnerable. Red chose to reinforce, as shown in Figure 3: now, it cannot be captured, as the resulting stack wouldn’t be strictly bigger. Reinforcement wastes tempo, but can be used as a solid defensive move, particularly in the endgames.
The game begins with a brief setup phase, performed by the first player, the Host. First, a stack of two neutral pieces needs to be placed in the centre of the board, followed by freely placing two one-stacks: Red and White. The Guest then chooses whether to play first (with Red), or second (with White): this is a form of the pie rule. The neutral stack does not contribute to any lines of sight and can be captured. The players are free to experiment with alternative setup protocols, but this one is recommended and supported in all computer implementations.

In Figure 4, Red’s expansion is inhibited by the central two-stack, while White has a nice, open position. 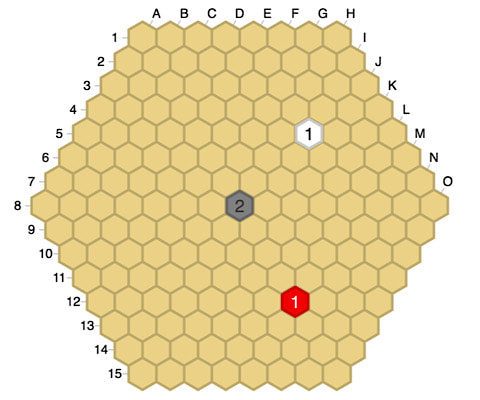 Figure 4: Example of opening placement
The goal of the game is to have more stacks on the board than your opponent. The game is theoretically finite, but playing it until its natural termination is unnecessary. At some point, the players will establish clear spheres of influence, allowing them to pass and score. Some computer implementations use heuristics to help with basic scoring. A game of Tumbleweed cannot end in a draw.

How Tumbleweed feels to play

Long-range lines-of-sight make every opening move matter on a global scale. Since 1- and 2-stacks are generally very vulnerable to capturing, balancing territorial influence and safety is the crucial consideration in early game.

In Figure 5, White was able to establish influence in the upper part of the board, while Red is strong on the bottom and on the left. Red’s presumptive territory is bigger, but White has multiple attack vectors: the fight is only beginning! 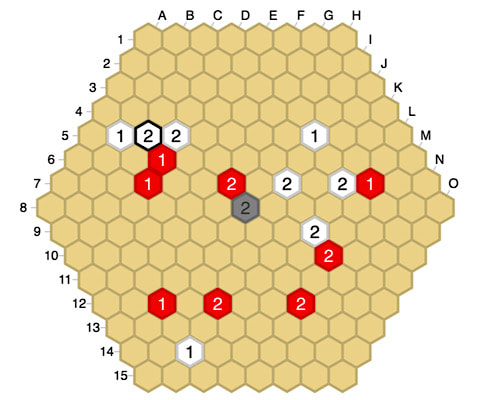 Figure 5: Example position after the opening
Once both players establish sound networks of stacks, a brutal and tactically challenging midgame ensues. Though the theory is far from settled, a lot of patterns have already been recognized. Among the most important considerations is making and breaking of walls: structures that can cut off enemy lines of sight, securing entire sectors of the board. As the game progresses, the board will inevitably become more crowded, and thus the moves will generally be more local in nature – though one must still be wary of “snipers” (late-stage captures that utilize long lines-of-sight and are thus harder to spot).

In Figure 6, E3 is a neat multi-purpose move. It attacks I7, and takes control of E5, preventing White from playing there and sealing off his upper wall. It also exerts much influence on line 3, allowing Red to potentially start building a wall. 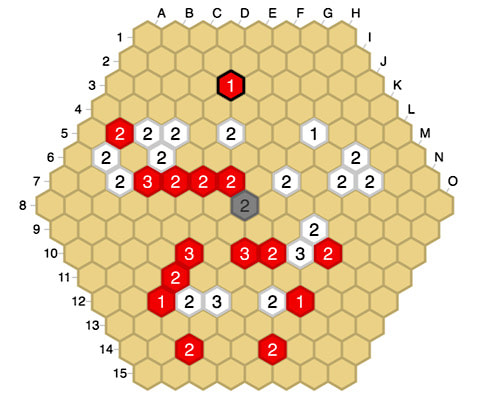 Figure 6: E3 is a strong move.
Towards the endgame, Tumbleweed becomes a series of life-and-death and territory-maximizing problems, before finally stabilizing into a set of regions defended by unbreakable walls. At this point, nothing is left to do; the players can pass and score.

Figure 7 shows the example game won by White 89:80. Either side has some invading moves left, but they would just be instantly captured. Figure 8 is a clarification of the scoring, where empty cells are highlighted with the colour of the player who owns them.
Some players have commented that Tumbleweed shares interesting concepts with Go, such as territory or life and death. To others, the line-of-sight placement is similar to the shooting action in Amazons. Clearly though, all these games have very different flavors and heuristics, and need not compete with each other.

Where to play and the community

Mike Zapawa created Tumbleweed during a COVID-19 lockdown. Since meeting in person was impossible, it was primarily meant for online play: the first “boards” were drawn in PowerPoint and Paint. For smaller board sizes (5-7 cells per side), the game can be played with stackable tokens such as poker chips. For larger boards, the number of required tokens becomes excessive, and bulk dice have been proposed as a viable alternative.

Currently, the best place to enjoy the game is the Internet. Though only few months old, Tumbleweed has already amassed a small but committed community. It has become one of the most popular games at IG Game Center, and it is also playable on several other platforms, including Stephen Taverner’s Ai Ai, Christian Freeling’s MindSports, Zach Burnam’s The Garden Gate, and Project Ludeme’s Ludii; there is also an ongoing effort to implement it on Board Game Arena. Some of those offer an AI opponent, but as of today no program can play competently on the default size 8 board.

Tumbleweed has an active Discord server and a Facebook group. The community is generally very welcoming, with first players more than willing to play training matches against newcomers and share their secrets. Game theory is constantly being discussed and expanded upon. Ignazio Panades has regular Twitch streams of Tumbleweed games being played in real time and analysis of the past exciting games between experienced players. Anton Christenson made the interactive board and diagram editor used for the diagrams in this article.

Tumbleweed players are very passionate about the game, and go to some lengths to see it grow. Most notably, a tournament has been announced for April this year, with cash prizes offered to the best performing new players ($100 for the best one, $50 for the runner up, and $20 for a randomly selected participants). For details and submissions, one should contact Mike Zapawa.

In this endgame puzzle, Red is on the move and must minimize White’s territory. Under optimal play, White should be left with only four stacks. There is a unique first move, and every response by White has a unique counter-play.◾️ 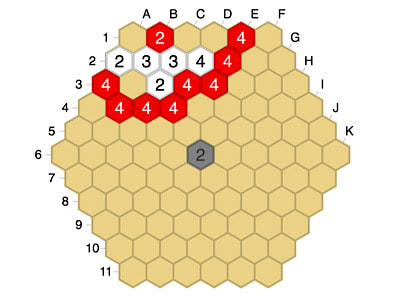 ​This article uses images from Christenson–Panades match, played on 18/2/2021 on IG Game Center.
One amazing thing about Tumbleweed is that a ruleset that is so unlike that of Go should unfold in a manner that is so  Go-like, in which opposing walls of pieces face off and enclose territories. A second amazing thing about Tumbleweed is the minimalist simplicity of the ruleset, reminding us of a game that is discovered rather than invented. Nevertheless, Tumbleweed does not have the black-and-white clarity of Go because piece strength depends on line-of-sight connections with other pieces. Lines of sight need to be counted and can be quite difficult to see on the larger boards. New players need to be careful not to miss lines of sight.

Of course, it is always nice to play games with a physical set, which offers a much better tactile and visual experience than online play. The question is, what kind of physical set would best suit Tumbleweed. Small stacks of pieces would, I think, be too fiddly. The solution  I came upon is to use dice for the pieces. Possible Tumbleweed stacks of pieces perfectly match the numbers 1 - 6 on a standard die, and the three pairs of opposite faces on a die match the three lines of hexagons that pass through any given space. Dice, in a way, are perfectly suited as pieces on a board of hexagons. Tumbleweed may be one of the best uses of dice in a combinatorial abstract game since Chase! 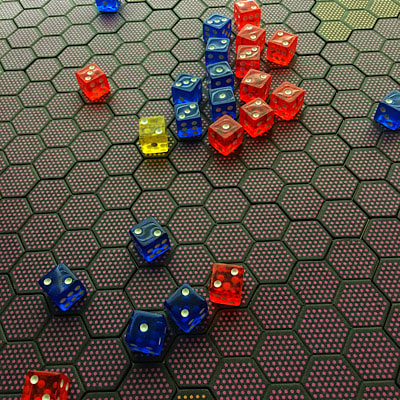 So, for my own set, I use two sets of a hundred dice each in red and blue, and an additional yellow die to start in the centre. For the board, I use Ton van Der Valk's modular hex board that I have used for Keil and other hex-based games. With Ton's board I can construct a hex-hex board up to base 12, and of course base 11 is all that is needed for the largest game of Tumbleweed. The dice and the modular hex board make a great experience of actually playing Tumbleweed with a physical set. ​~ Ed.
Next
Table of Contents