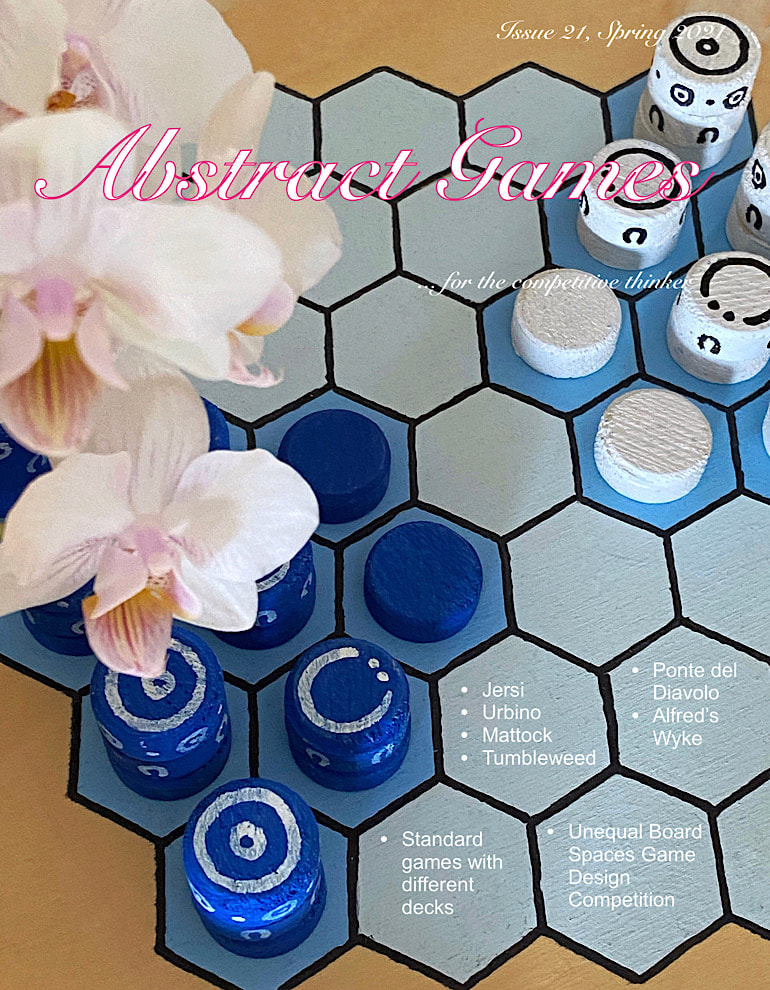 Accasta (1998) is a game by Dieter Stein, and one of his first games. The image shows an Accasta prototype that Dieter sent to Abstract Games back in 2003; an article about the game would have appeared in the old Issue 17. Years passed in which Abstract Games was dormant,  and the article was subsequently published here: Accasta - Introduction to a Pure Stacking Game. Nevertheless, Accasta has stayed with us throughout the years, and every now and then we still play this fine, unusual stacking game, using the original prototype.

Accasta pieces come in three types, Shields, Horses, and Chariots, which can move, respectively, up to 1, 2, and 3 spaces. The top piece controls the column, and can move any pieces under it, up to the whole stack, according to the power of movement of the top piece. A stack can split, and if it exposes a lower column controlled by the moving player, this column, too, may move in the same turn. Stacks can land on any friendly or enemy stacks within their reach, but here is the key rule: no stack can have move than three pieces of any one colour. This means, for example, that if you have a stack with three captured enemy pieces under it, it is invulnerable to recapture. The pieces begin arranged, facing off across the board, each army in its own nine-space castle.  The objective is to control three stacks in your opponent’s castle at the start of your turn. Accasta’s goal is similar to that of Camelot or Jungle, occupation of key spaces on the opponent’s side of the board.

Accasta has a variant, Accasta Pari, in which there is only one piece type. The power of movement of a piece controlling a stack is determined by the number of pieces of its own colour underneath it. Accasta Pari is quite a different game. I have not played enough to be able to evaluate its merits, although with just one piece type the rules for Pari are simpler and more elegant. I like the three piece types of the original game, although my preference may be based on familiarity with the older version, and nothing more substantial.
​
Accasta Pari was joined by two other stacking games, Abande (2005) and Attangle (2006), playable with a single set as Tactic Blue, and published by Bambus Spielverlag. Dieter Stein’s website lists a total of 25 games, many of which can be played on his own website or on SuperDuperGames. Urbino is reviewed in this issue, which also includes an interview of Dieter Stein by Rey Armenteros. Many of Dieter’s very best games are published in attractive wooden editions by Gerhards Spiel und Design.
Table of Contents