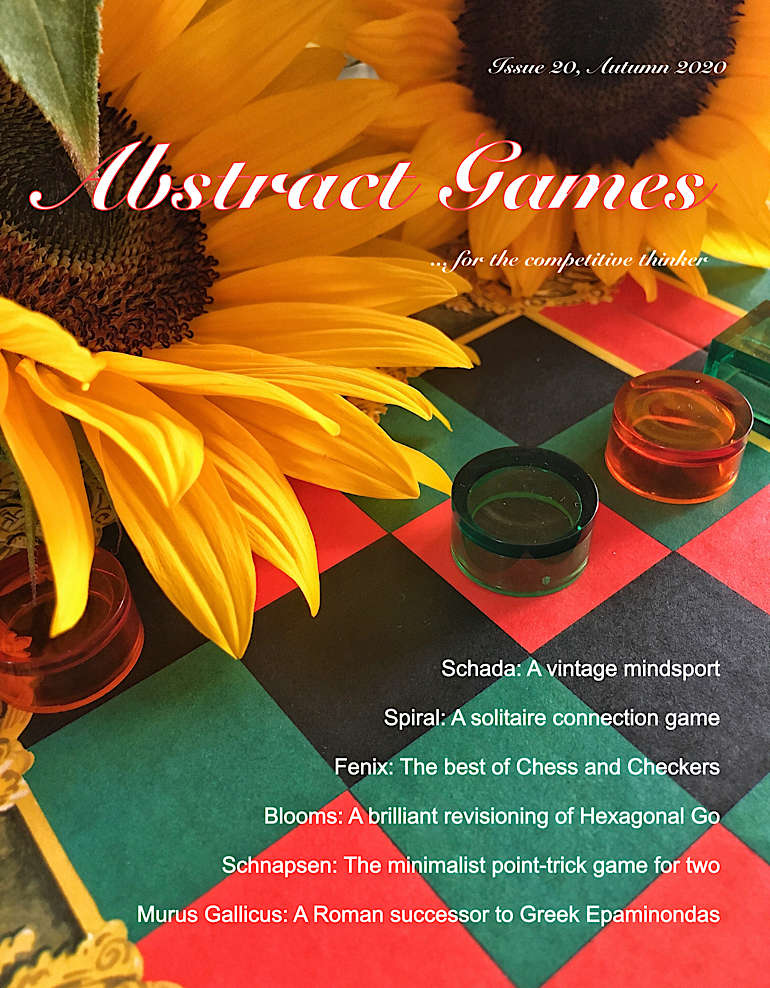 Pagode (or Pagoda) was published by F. X. Schmid in 1973. The image shows a detail from an ongoing game with the original F. X. Schmid set. The full-board position is shown in the image in the Table of Contents. The game box cites "Valentin Siena"  as the author and states, in my translation of the original German, "A board game derived from 'Shuti,' an ancient game of astrology from East Asia. It is richer in problems than Chess, but simpler in its rules." Actually, the designer’s name is a pseudonym for Friedrich Johann Gebhardt (1919 - 2006), there is no East Asian game called "Schuti," and in fact no traditional game anywhere that is anything like Pagode. And of course, the game Pagode has nothing to do with astrology.

Despite these uncertain origins, Pagode was well liked when it appeared. Rod Rivers reviewed Pagoda in Issue 46  of Games & Puzzles magazine (March, 1976), giving it the highest score of 6, a very rare accolade for Games & Puzzles. In Issue 50 of Games & Puzzles, Kendall Johns suggested a modification of the scoring system, and then in Issue 66 Rod Rivers followed up his review with some thoughts on opening play. The rules of Pagode were covered in the book Das Buch der 555 Spiele by Erhard Gorys (Naumann & Göbel, 2002), and play was illustrated with an annotated sample game. Actually, two annotated sample games are included in the original rule book, making a total of three historical annotated games. Pagode enthusiast Derek Carver submitted a description of Pagode for AG13, and then some clarifications of board colours and first turn rules were included in a letter from Ralf Gering in AG15. (Some of the other historical information here is also thanks to Ralf.) Nevertheless, Pagode remains an obscure old game—sadly, because it is very good.

Pagode is an alignment game played on a 9x9 board with three different colours, one colour for each player and a neutral colour. Each player has seven pieces each of two different types, Stones and Columns. The Columns are easier to relocate on the board, but they do not score. A Stone on its own colour scores double; a Stone on the opponent's colour scores a single value; a Stone on the neutral colour does not score. The players place their pieces on the board in an attempt to form "buildings." Most buildings are squares of different sizes, the larger the square, the greater the base scoring value of each of the Stones that constitutes the building. Two pairs of pieces of the same colour facing each other across opposite sides of the board also score highly. The most valuable building is a "Pagode," which is a square with all four pieces on the central row and central column. A building scores the total of the values of the pieces constituting it. A building consisting only of Columns is "illegal." Two other kinds of illegal building are a line of three pieces equally spaced or a line of four pieces where spacing is irrelevant. An opponent can "tear down" an illegal building and remove its pieces from the board.

A player who creates a scoring building can declare the end of the game. The opponent then makes one last move. The winner after the opponent's last move is the player with the higher-valued building. Obviously, you do not declare if you see that your opponent can beat your score with one more move! Only the winner scores, the total value of the winning building. A match consists of a series of games—not unreasonably, since games tend to be quick.

Pagode is an unusual scoring alignment game. Like many (most?) alignment games it tends to be tactical rather than strategic, although there are obvious and simple strategies, like placing Stones on your own colour. A key technique is to force  your opponent to defend against your creation of a building by making an illegal building. Then, you tear down the  illegal building, establishing a material advantage. As with most (all?) alignment games, the main technique is to create multiple simultaneous threats. Pagode is a largely forgotten game, which deserves some attention. ~ KH
Table of Contents