by Lucas Borboleta
The development of Jersi began in May 2019, and after feedback from a small group of testers the rules stabilized in July 2020. The game is playable for free on the web platform tabletopia. We are considering programming the rules on BoardGame Arena. In addition, a publisher, to whom the copyright has been transferred, is working on its physical availability.

Through an overview of the game's development, which may interest games designers, the mechanics of the game are revealed. Then, the rules statement fully specifies these mechanisms. Subsequently, a few tactical notes illustrate the possibilities of the game. Finally, a conclusion is made.

The five Chinese elements inspired the rules of capture, although their complexity has been carefully reduced to the simpler cycle of "Rock > Scissors> Paper,” giving each player 4 Rocks ◯, 4 Papers ▢, and 4 Scissors ╳.
The gestures of stacking, unstacking, and long step were imposed almost with a childish need to manipulate wooden pieces. Limiting stacks to a height of two has appeared to be sufficient to define an interesting duality between movement and capture: the height of a unit (cube or stack) determines its ability to move (1: short step; 2: long step); the top determines its power of capture. Thus, in a stack, transport is accelerated, and the top protects or endangers the base, because an attacked stack is always entirely captured.
​
The will for more than one move per turn, at a moderate cost of analysis for players, has been satisfied thanks to the following continuity principle: building a stack then lets you move it; moving a stack then allows you to move its top.
The initial objective of completely capturing at least two types of opposing pieces was replaced, at first, by the objective of capturing the opposing King, a new non-combatant type of cube. Subsequently, following the observation of very defensive and static attitudes by some players, the objective became crossing the board with your own King. Mountain, Wise Man, and Fool were added to balance the power of the stacks.
Several requests for moderation of the stack power and for increased control of space were met mainly by the introduction of four Mountains cubes, invincible and immovable, droppable from a reserve beside the board: a Mountain slows movement down like a real mountain pass, as it can be crossed only by a single cube; a stack of two Mountains must be bypassed. In addition, two Fools acting as joker fighters were added to the game, as well as two droppable Wise Men acting as non-combatant carriers.
The hexagonal board has been enlarged several times to guarantee a reasonable organization of attacks and defences. A cartesian board, with or without diagonal movements, was tested and abandoned because of too many or too few degrees of freedom.
​
Initially, each element of the game received a name coined in the constructed language Lojban. But finally, all exoticism has been dropped, except for the name of the game, Jersi, which means “to chase” or “to pursue” in Lojban. My son still calls the king "kunti," which signifies "empty" in Lojban. 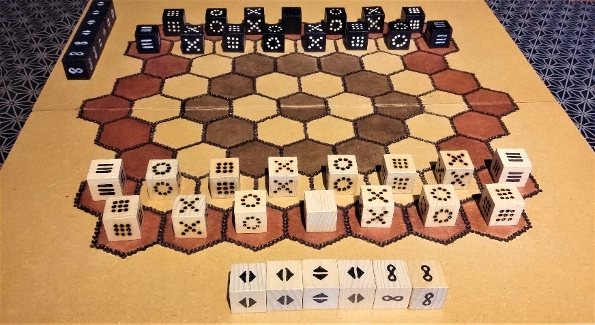 Wood prototype based on the stabilized rules with aesthetic variations
Rules

Jersi is a game for two players, White and Black. On a hexagonal board of 69 hexagons (see Figure 1), each player manages 21 cubes of his colour: 1 King, 2 Fools, 2 Wise Men, 4 Rocks, 4 Papers, 4 Scissors, and 4 Mountains. Mountains and Wise Men start beside the board, in the reserve (the grey hexagons of Figure 1). The other cubes start on two opposite edges of the board at fixed positions. White starts the game. The goal of the game is to bring your King to the opposite edge of the board first. A captured King is always put back into play. 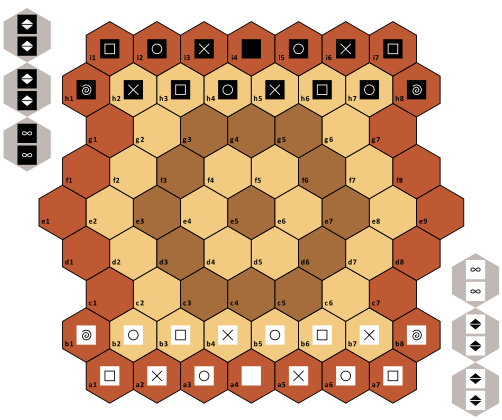 Figure 1: Pieces at starting position
Cubes move individually in short steps by one hexagon, or in stacks of two by a long step over one or two hexagons in a straight line from the starting space. Jumping is illegal. A cube of the reserve is dropped onto the board onto an empty hexagon or onto one of your own cubes. Two cubes dropped in the same turn must land on the same hexagon or on two adjacent hexagons. Once dropped, a Mountain can no longer move (neither alone, nor in a stack), nor be removed from the board.

Figure 2: Stacking exceptions for King, and high and low Mountains
Moving a cube on top of one of your cubes builds a stack. Likewise, moving a top cube of one of your stacks unbuilds it. Figure 2 shows exceptions. The King must be at the top of a stack; a Mountain must be at the bottom of a stack or on top of another Mountain; a Mountain can be at the bottom of a stack, with an opponent's cube on top, provided the opponent's cube is not another Mountain.

​The diagrams below show the possible moves, where a, b, and c are any cubes that are all the same colour, and m is a Mountain of any colour. The final position of the moving piece(s) after the first move is shown in blue; the final position of the moving piece(s) after the optional second move is shown in green.
A good way to think of the movement choices is that there are two symmetrical standard moves: create a stack and move it; move a stack and uncreate it. However, there are three caveats: the second part of the standard move is optional; instead of a standard move the player can instead just move a single cube; Mountains once placed do not move, either singly or as part of a stack.

Moving your unit (cube or stack) to a hexagon occupied by an opposing unit (cube or stack) is possible if your unit is stronger. In this case, the captured opposing unit is removed from the board and replaced by your own unit. The power of a stack is determined by the power of its top. Thus, cubes and stacks do capture each other regardless of their height. However, a cube on top of a Mountain can only be captured by a single cube. When you capture the opposing King, at the end of your turn, you must reposition it anywhere on its starting line. 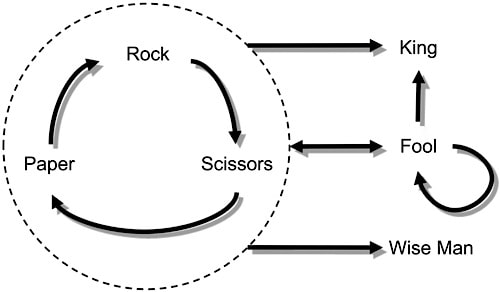 The King, Wise Man, and Mountain are not fighters—they do not capture. The fighters are Rock, Paper, Scissors, and Fool.

Any fighter captures the King.

The Wise Man, like the King, is vulnerable to capture by any fighter, with the exception that he is impervious to the Fool.

​In attack, the Fool captures any fighter; in defence, the Fool is captured by any fighter, including an opposing Fool. The Fool is a kind of universal fighter, able to capture and be captured, with the exception that the Fool does not defeat the Wise Man.

Nothing captures a Mountain, and once placed Mountains do not move and therefore do not capture. The Mountains are hard barriers for the opponent; Mountains cannot be captured and opposing piece can be moved onto a Mountain without capturing the Mountain. Mountains slow down the movement of  your own pieces, because even your own pieces can only move over Mountains singly. Two Mountains stacked together is an impenetrable barrier.

A player wins the game when his King reaches the opposite edge of the board, or when the captured opposing King cannot be repositioned, or when no action is possible for the opponent. The game is declared a draw if no capture other than the King has taken place after 40 turns since the start of the game or since the last capture.

The rules of Jersi generate interesting tactical situations. A few are presented here with the intention of enlightening the reader on the atmosphere of the game.
​
The move notation is as follows:
Stacks are fast

​Indeed, a stack can move two hexagons per turn. Virtually a stack, unopposed, could cross the board in 4 turns (see Figure 5). In comparison, a single cube needs 8 turns. 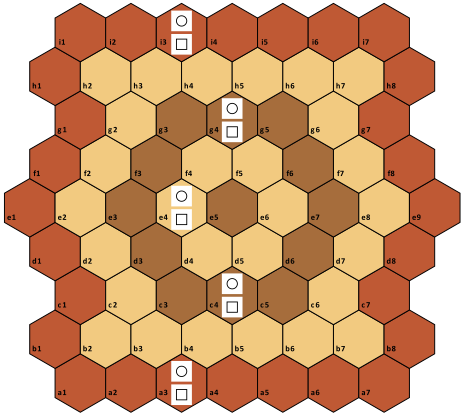 A stack can capture twice per turn (see Figures 6a, 6b, and 6c). So, technically, a stack can capture 4 cubes per turn. In this case, admittedly very theoretical, if the stack is captured, alone, during the opponent's next turn, then the net result would be a gain of 2 cubes.
Stacks can attack and self-protect

As shown in Figure 7a and 7b, a stack can, in the same turn, attack and protect itself. This brings up a general advice about rhythm: you must be careful not to waste any turns to properly lay out the top and the bottom of a stack.
Versatility of the triad

A stack is already powerful, but close cubes ready to build a stack are also powerful. Especially, powerful is a triad of cubes as shown in Figure 8, which is composed of one each of Rock, Paper, and Scissors. This triad can defend many hexagons on the f and g lines. 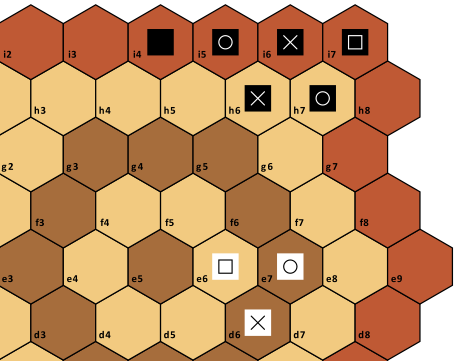 It is obvious, but worth mentioning, that it is of strategic importance to maintain a numerical balance in the fighting triad of Rock-Paper-Scissors. For example, in the extreme case, if you no longer have Rocks, but your opponent still has Scissors, then your own Papers are threatened. Breaking your opponent's balance to your advantage is a valuable goal in the opening.

The King is not only the cube that delivers victory. The King also allows some pressure to be applied as shown in Figure 9 on the right wing. 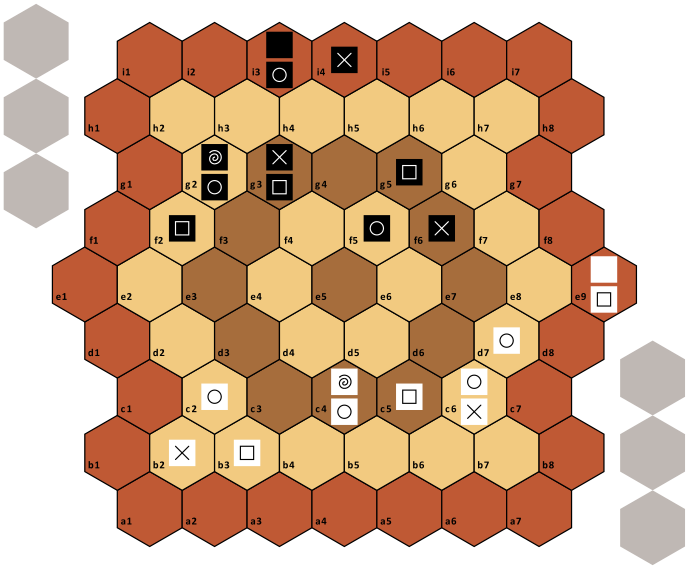 In some case, it is be valuable to use the king as a carrier as shown in Figures 10a and 10b, where the Rock is welcomed to defend the white Paper and Scissors.
Fool as universal defender

A typical usage of the Fool is as a universal defender, as shown in Figure 11 at e3. Because it is on top of a stack, it can efficiently protect an empty area: a no-man's land. 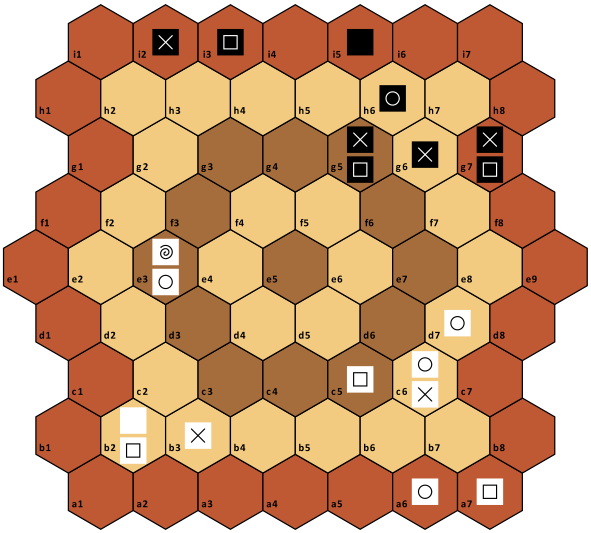 The Wise Man was designed for bringing back into play isolated cubes, thereby balancing the power of the stacks. In the situation of Figures 12a and 12b, the drop of the two Wise Men provides defence of the Rock at d4, and more globally, allows White to recover some control of the central zone. 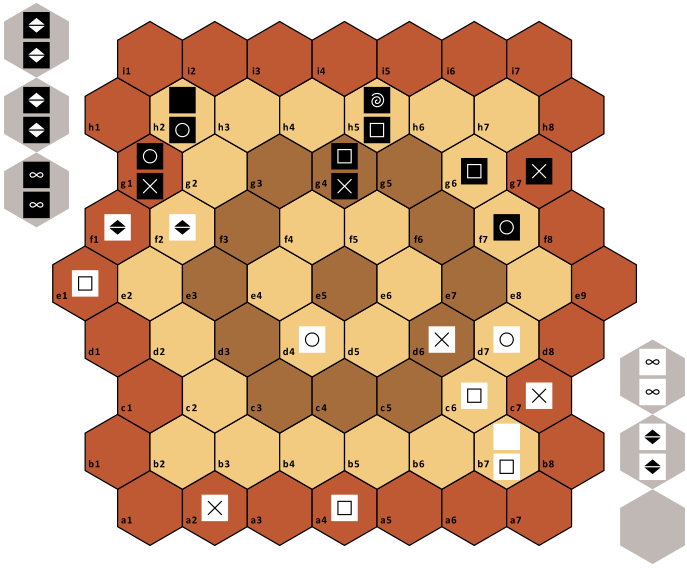 Figure 12a: Start of White turn 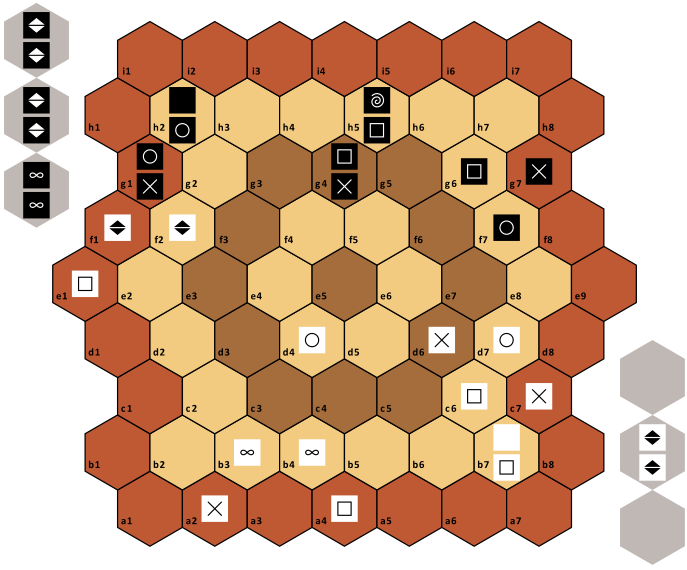 Figure 12b: Drop of two Wise Men to defend Rock at d4 and the centre: W:b3/W:b4
Wise Man as King blocker

Dropping a Wise Man can block the opposing King achieving victory, as shown in Figures 13a and 13b. Tactically, in this case, the Wise Man is more effective than a Mountain.
Mountains can save time

When the opposing King is going to victory, dropping Mountains can provide the time needed to organize a more valuable defence, as shown in Figures 14a and 14b.

Figure 14a: Start of Black turn

Figure 14b: Drop of two Mountains to block the White King: W:g6/W :g7
Mountains can break up powerful positions

In the middle of the game, dropping Mountains can break powerful opposing positions, helping to recover some control, as shown in Figures 15a and 15b, where White recovers some control of the left wing. 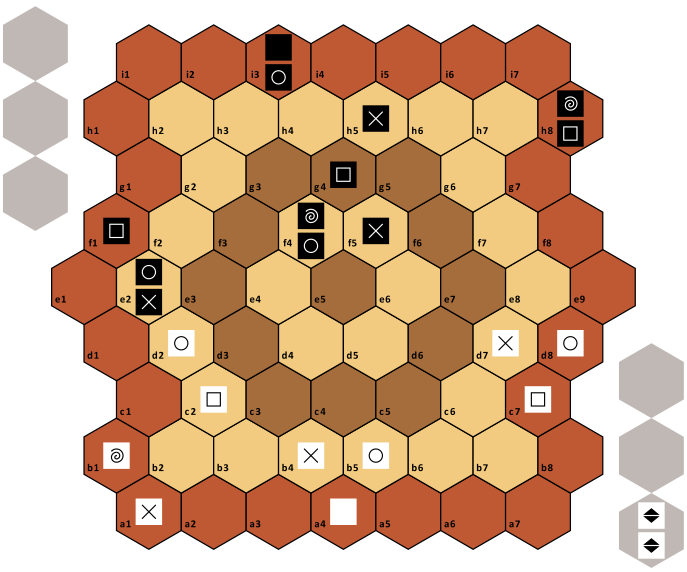 Figure 15a: Start of White turn 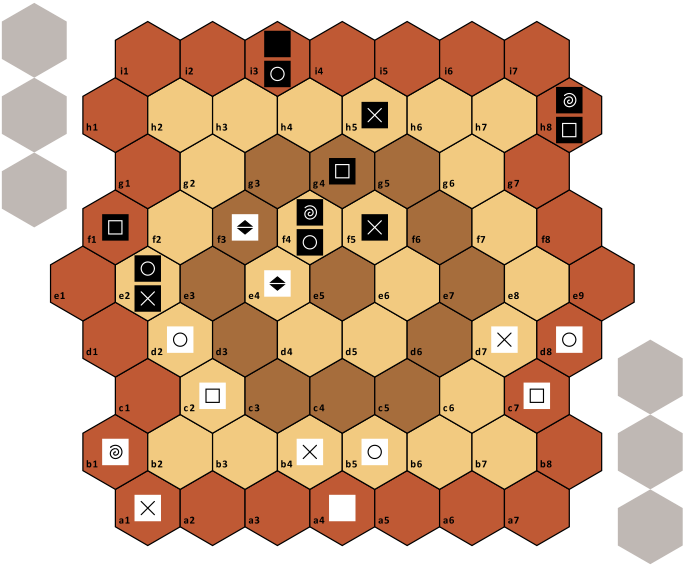 Figure 15b: Drop of two Mountains to break the power of stack at f4: M:f3/M:e4
Mountains can cut off the retreat

Dropping Mountains can be used to cut off the retreat of cubes or stacks for later possible capture, as shown in Figures 16a and 16b. 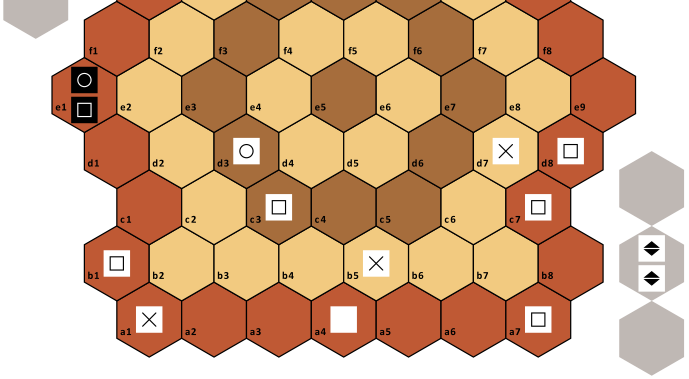 Figure 16a: Start of White turn 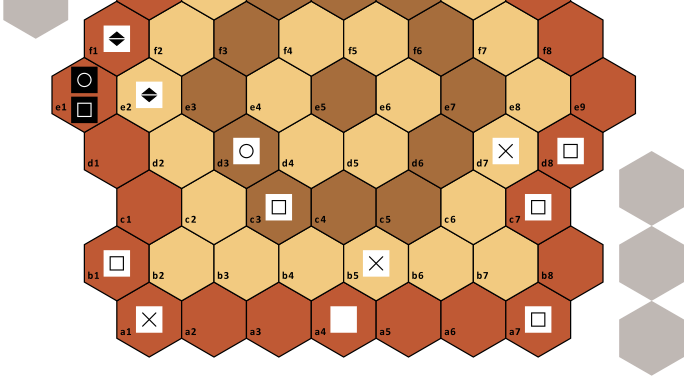 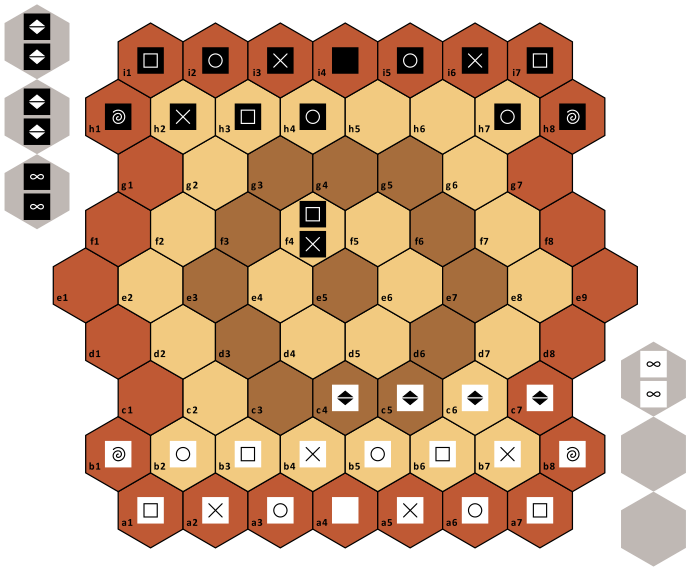 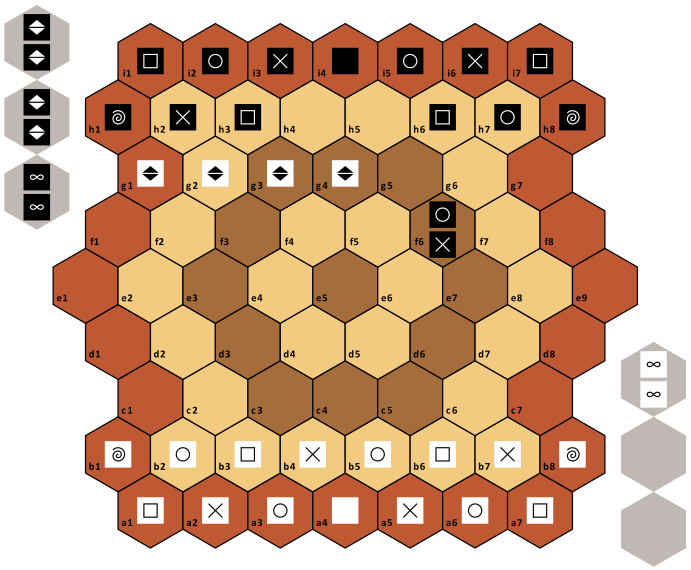 This article aims at providing the reader with some insight into the atmosphere of Jersi, its tactical possibilities, and hopefully the desire to try it. Strategies remain to be developed. For example, can the Helm's Deep Defence be effective?

I thank Kerry for his welcome in his magazine, my son, alias "Fox," for his constant interest from the first days, and finally François, my publisher, who encouraged the evolution of the game.◾️
Next
Table of Contents