THE NEW ABSTRACT GAMES
Previous
In the beginning there were two. Two dice, that is. Can you enter the bottomless well of your childhood and remember the first time you encountered dice. If you are an avid gamer I am sure you can. Where did you first encounter them? Was it Monopoly? Or Risk? Or a simple childhood game? Did you roll those dice and say, “This is good”? I surely did.

In the late 1950’s I played a game called dice baseball. You threw two dice and different combinations resulted in various outcomes. Two sixes was a home run. A four and a three was a ground out. I would organize my baseball cards into lineups and play multiple games. It was all luck based, but with just a little bit of imagination it seemed very real. I would invent all kinds of sporting games with dice—hockey, football, and basketball. I figured out a way to approximate the scores of pro games. If you roll four dice twice, the sum will be very close to one quarter of a professional basketball game. I am convinced that my arithmetic skills emerged from countless games of dice basketball.

In fourth grade, I went to my friend Lenny Volin’s house. He had an exotic game called APBA baseball. I discovered the meaning of the term realistic. APBA cards of baseball players would simulate their professional performances. Of course, I eventually graduated to even more sophisticated, dice-based sports simulations.

There were many other dice games. Yahtzee was the most interesting. Then there were the dice with letters. My first such dice word game was Spill and Spell. You can no doubt can recall your own experiences with dice. Depending on your age and when you discovered board games, I am sure you have a unique dice autobiography. An entire generation was reared on the polyhedral dice required for Dungeons & Dragons. Then I discovered Backgammon, its many variants, and through the years I have explored some of its many iterations—Chebache (AG3), Tatsu, Dodecamente.

In the last decade along with the boom in Eurogames, we’re enjoying the proliferation of dice games, many of which present wonderful new ways of using traditional dice. It seems that all the top designers have at some point utilized so-called dice mechanics in their designs. Reiner Knizia wrote an entire book on the mathematics of more traditional dice game, Dice Games Properly Explained, and we have games such as Grand Austria Hotel, The Voyages of Marco Polo, Castles of Burgundy, and countless others. We have seen an almost unimaginable variety of custom dice for games such as Roll for the Galaxy. Dice are used to simulate buildings or art works in Blueprints, Cubist, and Sagrada. Or they are used to build things (Das Spiel). And there are dozens of new pure dice games like the Quixx series, Ganz Schön Clever, Birth, Dizzle, and Dice Stars. We have fairly complex dice rollers like Favor of the Pharaoh and La Granja: No Siesta. Readers know I am merely scratching the surface here. For a more comprehensive look at the “roll and write” genre of dice games, check out this BGG list 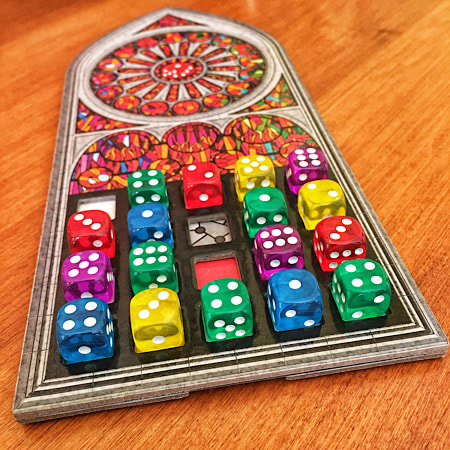 Sagrada
There are quite a few abstract games that use dice as playing pieces. These games do not involve any random factors, rather they use dice as intriguing ways to claim territory, move, and establish patterns. Chase (AG9) is among the best of these efforts. One of my favorites is Colliding Circles. For a somewhat dated list of these games, check out this BGG list

I would like to offer some ideas on the meaning of dice, and why they are so important in many cultures through space and time. Dice (and their predecessors) simulate random processes. In his comprehensive Oxford History of Board Games, David Parlett surveys the extraordinary predecessors to dice, stretching back to antiquity: "The Indians of Asia have been using cowrie shells from 2300 BCE to the present day and those of the Rig Veda (c.1500 BCE) used multiples of the naturally binary vibhitaka nut.” There is a lovely illustration displaying Amerindian binary lots, including sticks, sea shells, walnut shells, plum stones, bone, wood, corn grain, and beaver teeth, from native cultures throughout North America. Parlett also discusses the relationship between divination, soothsaying, and games of chance, hesitant to draw any conclusions about the relationships.

However, John Minford in his recent I Ching translation describes the game-like character of the I Ching. If you have never experienced the I Ching, it is a sophisticated divination system, linked to centuries of Taoist, Buddhist, and Confucian wisdom. It consists of  eight trigrams of dashed and solid lines, representing natural systems—heaven, earth, fire, water, wood, mountain, lake, thunder, and wind. Through a divination process, these eight trigrams combine to form 64 hexagrams. Each hexagram represents a metaphor, ripe for interpretation. Historical commentary on the hexagrams is comprehensive, rivalling the Bible, the Torah, the Koran, and Buddhist Scriptures. What is unique is how the divination process reflects a unique circumstance at any given point in time. It is worthwhile to read how John Minford compares the process to a game:

The I Ching is a game, a most demanding game. One does not just read it, one does not just translate it. One plays it, one plays with it, one interacts with it. It plays, too, in deadly earnest.... The act of reading creates a new dynamic, triggering reflections and conversations that might otherwise never take place. To call this a game is not to be irreverent, it is not to trivialize it. On the contrary, it is to elevate it.

Intriguingly, one proponent of the I Ching has found a way to use one d20 die and one d8 die to simulate the traditional yarrow sticks divination method. 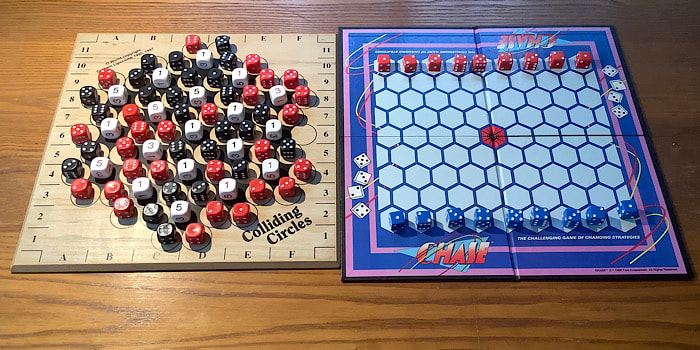 Colliding Circles and Chase
A recent issues of Abstract Games magazine  (AG17) describes SanQi, a game inspired by the Ling Ch’i Ching, an oracle system designed as a more accessible version of the I Ching. Playing pieces are Heaven (Shang), Man (Zhong), and Earth (Xia). You can play the excellent game and then learn about the system in Ralph D. Sawyer’s translation.

I do not think this is far fetched. We play games for many reasons—to exercise our minds, to build social connection, and for entertainment. But we also play to learn about life. Why else would you spend the countless hours that you do playing games, thinking about them, collecting them, and adoring them? Why do we treasure a game that is filled with mystery, that is accessible but unknowable, that is beautiful to behold and play, and that allows us to grow with it? I would not say that life is a game, but games do resemble life. Perhaps a great game designer will use the I Ching as the basis of a wonderful, unsurpassed Eurogame, or develop an entirely new genre of abstract game, combining the eight archetypes with dice.

Let us get back to dice. When you roll the dice, whether they are d6 or d20, whether it's just one or a handful, whether it’s custom made with unique icons, you are setting the conditions of your turn, or a round, or perhaps the entire game. You have to deal with it. There is no other choice. So you make the best of it. Is it just a matter of probabilities for you? If you are a mathematician or statistician it might be, and if you like, you can use mathematics and statistics to form a philosophy of life. Max Tegmark, in Our Mathematical Universe; Our Quest for the Ultimate Nature of Reality believes that the universe and all it contains is a glorious suite of wonderful equations. I would rather get my wisdom from the I Ching. Or at least roam back and forth between the two approaches by letting them inform each other. Either way, dice are a fascinating tool to help you discover who you are within the boundaries of a game. To put it briefly, you’ve got to learn how to go with the flow!

Here is a silly thing I sometimes do. Often I cannot choose what game to play. So I find a way to divide my shelves into a division of six, and roll a die to locate a specific shelf. And then I count the number of games on that shelf and turn them into a division of six. Voila! I’ve chosen a game for the evening. It is a better process than staring blankly at my shelves, feeling increasingly incapable of making a choice among so many possibilities. Let the dice decide. Or as the instructions to Chebache, a Backgammon variant suggest, “Be one with the dice.” [The author's decision-making process is reminiscent of The Dice Man by Luke Rinehart, 1971. ~ Ed.]

Dice, like playing cards, are one of the great inventions of human culture. They are global in scope and extent. They span cultures and time periods. Playing games with dice and cards (not necessarily gambling) brings people and cultures together. My goodness, we sure can use more of that!

Dice teach you about risk, what it means to take chances, and how random processes are linked to everyday choices. What is the role of random processes in quantum physics, in evolutionary biology, or in presidential elections? How many times do you encounter a fork in the road, a crucial life decision, or some other kind of meaningful choice? What would have happened if you chose an alternative? What informed your decision? This is where the I Ching comes in. Through the divination process you arrive at a hexagram that provides a metaphor that helps you make your decision. It taps into what you already know. So do dice. When you reach that crucial point in a game, you might already have a strategy. The roll of the dice interferes with it. Do you go with your original approach? Or does the die roll force you to consider creative alternatives? This is what distinguishes the meaningful use of dice from sheer luck. How do random processes appear and how do they help you structure your decision tree?

The most wonderful aspect of dice is how much fun they are. And how pretty they can be. The dice in Sagrada are lovely to behold in action and there is no doubt that the bag of colourful dice is the game’s best feature. Then you get to roll them. Every roll is a new prospect—irony, humour, hubris, outrage, satisfaction, and delight. What will your response be?

So the next time you chuck dice, think about how it connects you to many human cultures through space and time, how it is a way to reflect on your own behaviour, and how it is the source of so much fun. Dice matter, games matter, and they are both a window into what it means to be human.
Next
Table of Contents