by Kerry Handscomb
Here is a summary of the rules of Jean, based on AG6 and adjusted slightly according to the analysis of Fredrik Ekman in the Jetan article in this issue. The pieces in the diagrams in AG6 were the design of Jean-Louis Cazaux. Subsequently, L. Lynn Smith proposed the symbolic piece representation shown below. 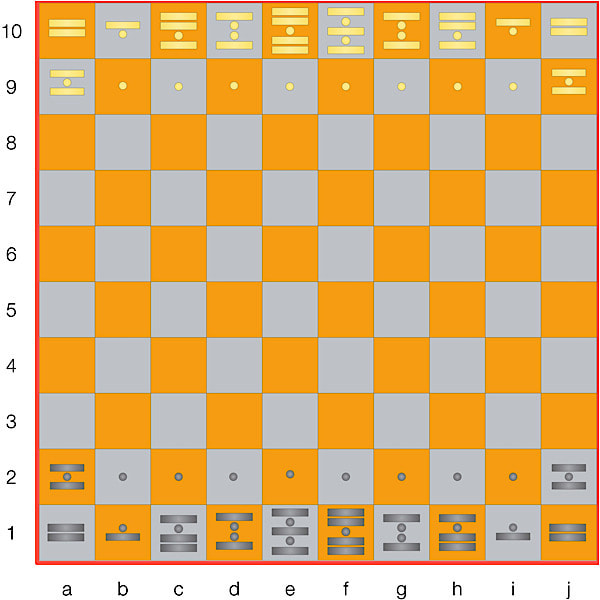 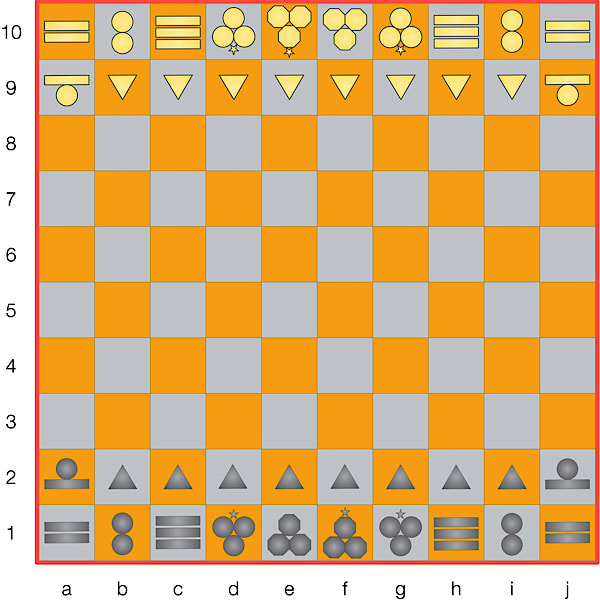 The black and orange chequered design and the two armies coloured black and yellow are traditional on Barsoom, and we have kept it. Note, however, the anomaly that Burroughs always used "orange" to describe the colours of both the pieces and the squares, and we have maintained this convention here and in the sample game. The bottom-right square is orange. Either Black or Orange can move first, and the players alternate turns, where a player moves one of his pieces on a turn. The powers of each piece are as follows: 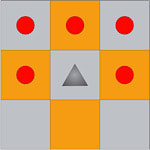 Panthan
A piece's movement follows in large part from its representation. Each piece completes its move in a series of one-square step moves, either orthogonally or diagonally. The number of steps a piece can move in a turn is equal to the number of distinct symbols in its piece representation (aside from the stars for the Flier and Princess). Thus, the Panthan moves one step; the Thoat, Warrior, and Padwar move two steps; the Dwar, Flier, Chief, and Princess move three steps.

Each horizontal bar refers to a one step orthogonally; each circle refers to one step diagonally; each octagon refers to one step either orthogonally or diagonally. The triangle representation of the Panthan is exceptional, referring to a one-square step move either sideways or to one of the three forward squares. Pieces must move the number of steps specified, not less, and can change direction with each step. The Thoat must make an orthogonal step first and then a diagonal step.

A piece cannot make a "null move," by simply returning to its starting square.

The red circles and crosses indicate which squares a piece can reach in a single turn. The stars in the representations of the Flier and Princess show that these pieces can jump, and can reach the specified squares no matter if there are intervening pieces, of either colour. For this reason, possible destination squares for the Flier and Princess are represented by red crosses, not red circles. If a piece cannot jump, every square in its series of steps must be empty, except possibly the last square, which may be occupied by an enemy piece.

Once you understand the simple symbol system, you can tell how a piece can move just by looking at its representation. A difference here from the rules in AG6 is the non-jumping Thoat. I have accepted Fredrik's analysis and preference that the Thoat should not be allowed to jump. Likewise, I accept Fredrik's recommendation that there is no distinction between Odwar and Flier, both can jump, and they are simply different names for the same piece.

The game is won by capturing the opponent's Princess. The game can be won also by capturing the opponent's Chief with your own Chief. If a Chief is captured by any piece other than the opposing Chief, the game is drawn. The game can be drawn also when both sides are reduced to three pieces or less of equal value, and neither side wins in the succeeding ten moves, five moves each.

Burroughs does not specify what "equal value" means for pieces. I will assume that a piece's value is the number of step moves it can make on a turn. I propose that when both sides are reduced to three or fewer pieces of unequal total value, then the player with the higher total valued set of remaining pieces wins. According to Burroughs' rules, of course, if the total value is equal, then the players have five moves each to finish the game decisively. Note that the three pieces on each side must include the Chief and Princess each, for otherwise the game would be decided already. The value of the third of these pieces on each side is what determines a win or potential draw. Of course, further study and experience of Jetan may indicate that the proposal needs to be adjusted or eliminated.
Jetan article