Reviewed by Kerry Handscomb
NXS (pronounced "Nexus") is game for two (or three) people played on two (or three) modular base-4 hex-hex boards. I have only played the game with two, and the review will focus on the two-player version. However, the author, Kevin Kane, assures me that the usual problem with three-player games, where two players can easily gang up and eliminate the third, is not much of an issue with NXS. This feature of NXS, that it is a good game for three, is worth investigating on its own.

In any case, two players use one modular board each, which are pushed together, and their pieces are arranged in predetermined patterns on their respective home boards. Each player uses 7, 10, or 13 pieces. Various aspects of the game are customizable, including number of pieces. Other options are to use one or two Merchants per side (explained below) or to change the number of points required to win. Different choices require different strategies. The options available are one of the nice features of NXS. 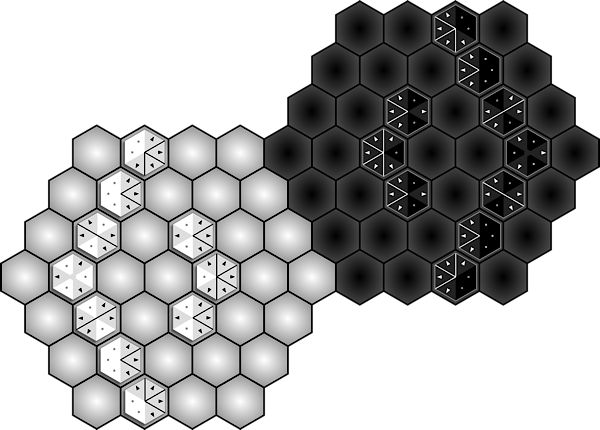 An NXS starting position.
The pieces each have three sets of markings: directions they can move, in straight lines through hexes connected at their sides; the number of spaces they can move; and lastly, the directions they can capture, one space "diagonally." Note that the sum of the number of directions a piece can move and the number of spaces it can move always totals six. Capture is by replacement, so that a piece jumps one space diagonally to the hex of the captured piece, which is removed from the board. Crucially, these captures cannot be made if either of the two hexes flanking the diagonal are occupied by an enemy piece.

It is interesting that pieces capture in a manner quite differently from the way they move. In addition, the capturing rule is asymmetrical, depending on whether either player has a piece on one of the spaces flanking the diagonal. With one of your own pieces as a  "flanker," you can capture, but your opponent does not have a reciprocal threat. These very common positions have the feel of  "shooting over the shoulder" of the flanking piece.

The pieces are all named after varieties of old-time sailing ships, such as Cutter, Frigate, Corvette, and so on. This is somewhat of a theme, although NXS is truly an abstract. The play of NXS reminded me of a space-combat wargame I was working on many years ago, and I can imagine various other themes, too. One special piece, the Merchant can neither capture nor be captured. Some setup options have two Merchants on a side, and some have one.

Each turn a player must move or make a capture, and then rotate a piece to change its directional orientation. Reorienting a piece is mandatory, and it does not have to be the piece just moved. The necessity to rotate a piece each turn is an interesting design choice, but a good one, I think. Often it seems as though there is no significant rotation, and you might just as well pass—if you could. However, now and then I find myself regretting  a missed opportunity to rotate a particular piece a move or two or three earlier. Missing fewer of these opportunities is a sign of good play, I suspect.

As the game starts, the pieces of both sides rush to their joint border, over which the struggle ensues. This aspect of the game reminded me most of a hard-fought rugby scrum. The pieces have to work together. As I mentioned above, when threatening an enemy piece, with a flanking friendly piece, you can attack with impunity, as the enemy piece does not  threaten you back. The Merchants are important here, because they are immune to attack, but can provide cover for your own attackers. With two Merchants on each side, the border can get congested, making progress more difficult.

As pieces are exchanged, the border becomes more permeable, and pieces start slipping through into enemy territory. This is where the game really shines. Often, at the end, both sides can construct winning positions, but one player is just a move or two ahead. The game becomes a race to reach a winning position. When I realized this property of NXS, I was immediately reminded of Shogi. Of course, Shogi is a kind of chess, and the ultimate objective is to capture the enemy King—which is nothing like the goal of NXS. However, the drop rule in Shogi makes it a superb attacking game that accelerates as pieces get exchanged. In a balanced game, both players will have unstoppable mating attacks, often with only one or two moves separating them. Shogi has an intense, exciting endgame; whereas Go, for example, tends to peter out towards the end, as individual moves become less and less significant. NXS has an intense and exciting endgame, just like Shogi. To my mind, the effect of their objectives to speed games to a climax is an excellent feature of both Shogi and NXS.

Of course, individual Go games may have exciting life and death struggles in the endgame, and it is certainly not my intention to disparage Go. But nevertheless, the trajectory of games such as Shogi and NXS is inexorably towards all-or-nothing climactic moves at the end, which is not true of Go. I think is is interesting to review David Ploog's article on "Stories and Themes in Boardgames" in AG18, from the perspective that Shogi and NXS more effectively support certain kinds of narrative than Go. On the other hand, Go much more effectively supports other kinds of narrative, and players can choose their preferences.

And so, I prefer the game with fewer pieces and a single Merchant, which highlights the effect of the objective. The "rugby scrum" phase is shorter and less significant, and the game speeds to an exciting conclusion. Of course, other players might actually prefer the puzzle-like nature of the more congested board—and as I mentioned above, one of the strengths of NXS is its ability to accommodate various styles of play.

The physical board is made of sturdy plastic with ship-like models for the pieces. It is a very nice set. Of course, you can try the game on Boardgamearena to see whether you like it. NXS has a lot going for it, and I highly recommend it.

Please refer to the NXS website for further information and to purchase a set.
Puzzles
The two puzzles below were designed by Enrique Sedano. These puzzles do not show real game situations, but they may help readers get used to the manner of movement and capture in NXS. The arrows on a piece show the directions it can move; the number of spots on a piece is the maximum number of spaces it can move in a straight line; the lines on a piece show diagonals of attack.

In both puzzles, Black is to move. White may only move to capture. In other words, if White can capture an opponent's piece, she will do so on her turn. Otherwise White does not move and Black has another turn. 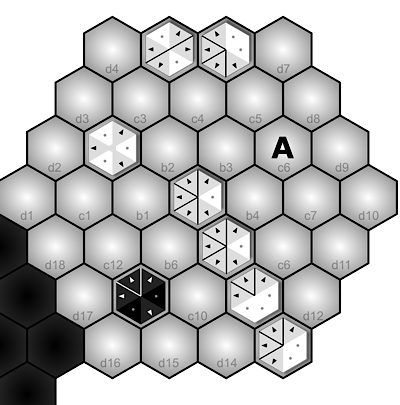 Puzzle 1: Find the shortest sequence of moves for the black Corvette to reach A without getting captured.

Puzzle 2: Find the shortest sequence of moves for the black Man-o-War (the central piece) to capture all six white pieces without getting captured. Remember, Merchants (c7 and c11) cannot be captured.
Next
Table of Contents