On a 10x10 board, if Blue plays 1.5-E5-D7 then Red cannot respond symmetrically, because that would fence off two regions of one square each. 1.10-D5-E7 is another exception. 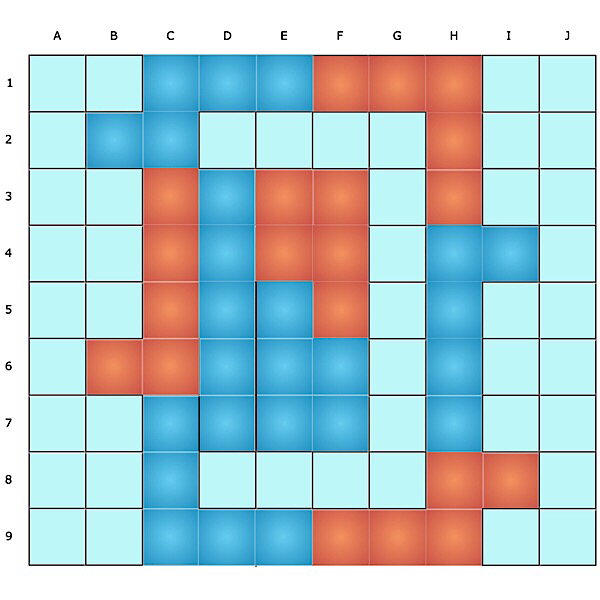 Now Red cannot make the symmetric move, because that would fence off two regions of four squares each. The only other piece that might legally fit in the central vacant region is piece 7, which has already been used. So, the central region is unplayable by either side. That leaves the two end regions. Red cannot place piece 2 in either region without illegally fencing off one to four squares. So, Blue can win from here by employing the symmetric strategy against Red!

Puzzle solution: Both players have used pieces 1 and 11, so no moves involving those pieces need be considered. Region A is in the range of 16-19 squares, so a maximum of 2 moves can be played there. There are 3 ways to move that would split region A into 2 dead zones, rendering further play there impossible. Region B is in the range of 11-14 squares, so only one move will fit. Regions C and D are both 15 squares, which means dead zones cannot form there. There will be room for 3 moves in both C and D, unless of course the players have already played the required shape piece.

The first thing Blue should look for, is a way to fence off a reserve move, in the shape of piece 8 or piece 10, which Red alone has played. Blue might also seek to avoid giving Red the opportunity to fence off a region in the shape of piece 2 or 5 or whatever piece Blue is going to play this move. If the battle to reserve moves comes out equal, then affecting the parity of the remaining moves (odd or even) means you choose which side plays last. It might be possible to affect parity in each of regions A, C, and D.

There is a move in region A which fences off a reserve move for Blue: 1. 7-B3-E4, which reserves 8-B4-D5. The only hope for Red now, is to try to create a reserve move in region C or D. Red can do this by playing 2. 7-B6-C9, which reserves 2-A6-A10, but after 3. 12-I9-G10 Red is in parity trouble. There are precisely 6 moves remaining on the board, and it is Red's move. Blue cannot be stopped from moving last. Red could instead try 2. 3-D9-B8 reserving 2-A10-E10, but then Blue has 3. 4-G10-F8, which has the effect of reserving two more moves, one just for Red, and one just for Blue. This leaves an even number of moves on the board, and both players have the same number of moves in reserve. Red has the move, and is therefore lost. 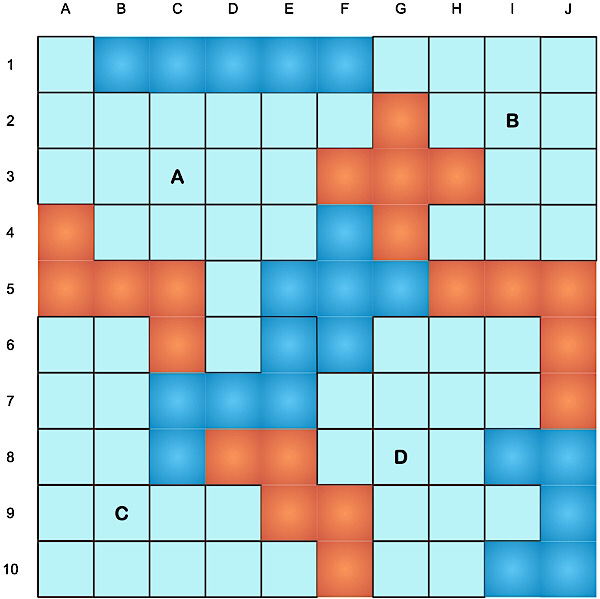