Toguz Kumalak (тоғыз құмалақ - Kazakh for “sheep droppings”), also known as Toguz Korgool (тогуз коргоол; same meaning) in Kyrgyz, is widely played in Central Asia. It is one of the few mancala games in which pits can be captured and turned into accumulation holes, a distinctive feature that adds another layer of strategic complexity. Toguz Kumalak has become a major mindsport that is officially promoted by the governments of Kazakhstan and Kyrgyztan.

The game is played on a board, which consists of two rows of nine oblong holes (otau, literally, “yurt”) and two parallel furrows (kazan, literally, “kettle”) between them. The kazan serve as stores for captured balls. Initially, there are 9 little black balls (kumalak) in each hole. The holes are made in such a way that the two players can easily distinguish between an odd and an even number of balls. In addition, each player has a larger ball in a different color (usually white) that serves as a marker for any tuzdik the player might make later (see below). The players sit opposite each other, on the long sides of the board, directly in front of their holes. A player’s kazan, however, is adjacent to the opponent’s row. The player who starts the game is called “White”, the other player “Black”. 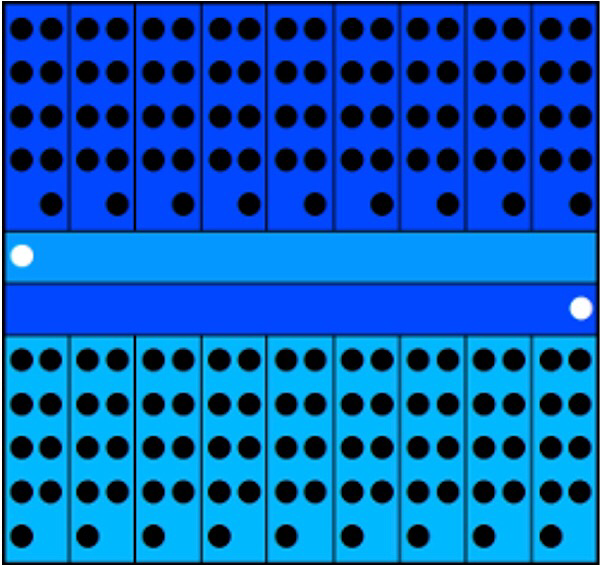 Toguz Kumalak starting position. White is light blue; Black is dark blue.
At his turn, a player takes with his index and middle finger all the balls of one of his holes, except one ball that is left in the hole, and distributes them, one by one, into the following holes in an anticlockwise direction around the board. If a hole contains only one ball, it is put into the next hole.

If the last ball thus sown makes the contents of an opponent’s hole even, its contents are captured. They are shifted with the index and the middle finger into the player’s kazan. Note that the opening move of each game captures 10 balls except move 19 (see notation), which is for that reason a bad move.

If the last ball falls into an opponent’s hole that has two balls (then numbering three balls), this hole is turned into a tuzdik (literally, “salty”) and marked with a special ball. During the game any balls, which fall into a tuzdik, are won by the player who owns the tuzdik, and are then transferred into this player’s kazan. A tuzdik is never skipped. Therefore, a tuzdik is an acquired accumulation hole, quite similar to the lubang rumah in Congkak or the kalah in the game of Kalah (usually known as “mancala” in the USA), except that in these games the accumulation holes are fixed from the beginning.

There are some restrictions in regard to the tuzdik:


The players move alternately and passing is prohibited. The game is finished when a player, on his turn, cannot make a move. In Kazakh this is called atsis kalu (literally, “left without a horse”). A player owns the balls he captured, the balls which fell into his tuzdik, and those that are still in his holes. The player with 82 balls or more wins. If both players have 81 balls, the game is a draw. In practical play, the game ends as soon as one player has secured the minimum number of balls needed to win, and the remaining moves are not played out.

Game clocks are used in all important Toguz Kumalak tournaments. In world championships the thinking time is up to three hours for each player. In blitz tournaments, however, players may be given as little as seven minutes. When a player’s time has expired, the balls that have not been captured yet are awarded to his opponent.

Toguz Kumalak is the only mancala variant with an official notation to record the moves made in a game. Each hole in a player’s row is given a number from 1 (left) to 9 (right). The notation of a move consists of two numbers: The first number denotes the hole where the move begins; the second number denotes the hole where the last ball is dropped. An “X” means that a tuzdik is created. If a player scores points by capturing balls by his move, his total score so far in the game, including the new captures, is provided in round brackets. Question marks denote weak moves; exclamation marks denote strong moves. For example, 5. ... 81X(13)! means that Black started his move from his penultimate hole and finished it in the first hole of his opponent turning it into a tuzdik; Black made a capture, and his score has increased to13; this was a good move.

There are three types of middle games. The most common develops when both players get a tuzdik in the opening. Another type occurs, when no player creates a tuzdik, which is rather unusual. An exceptionally exciting middle game results, when one player makes a tuzdik, while his opponent has captured more balls. This situation becomes a fight between a positional and a material advantage. The material advantage is constantly shrinking and so the game turns into a race. Who will be the first player to cross the magic number of 81 balls, which divides victory and defeat? Also keep in mind that a tuzdik can be created in 8 different holes and that two tuzdik can be located in 56 different ways. Each of these possibilities give a different flavor to the particular game.

Ralf Gering (White) has just made a tuzdik with 55(3). He won after another 48 moves despite being behind by 17 balls.
Endgame

The endgame begins, when expert players are able to predict the end of the game. The most important skills are counting tempi and the knowledge of special endgame techniques by which you can capture the balls necessary to avoid defeat. ◾️

Puzzle 3: White has 9 tempi, whereas Black has 11. White, however, can win, by decreasing the opponent's tempi using a block!

Puzzle 4: Each player has 9 tempi. Nonetheless, White can win by increasing his tempi!
Solutions
References

Shotayev, Maxat (2015). Toğızqumalaq's Compositions. Astana (Kazakhstan).
Ralf Gering (November 29, 1962) studied Culture and Religion at Tübingen University, Germany. Later he worked as a journalist. Ralf learned Toguz Kumalak in 2004. He won Silver in the main tournament of the First German Toguz Kumalak Championship in Schweinfurt (2011), Silver in the Blitz tournament of the 1st Richard-Karutz-Tournament in Sinzig (2013) and Bronze in the Blitz tournament of the Third European Championship in Schweinfurt (2016). He also was a member of the National Team of Germany in the Second Toguz Kumalak World Championship in Pardubice, Czech Republic (2012). Ralf wrote three articles previously for Abstract Games on traditional mandala variants: Vai lung thlân (AG12), Ot-tjin (AG14), and Selus and Sadéqa (AG16).

The image at the top left was provided by Ralf Gering.
Next
Table of Contents