David Parlett recently reminded me that I had once written "Every abstract game is a failed thematic game." Of course that is nonsense, and no one should know it better than I. But what I meant to say was that if a good theme presents itself in a newly invented game, one is crazy not to use it. Originally the game Ley Lines appeared to have a theme based on the mysterious linear alignments of ancient monuments, churches, burial mounds, etc. which dot the English countryside. 'Mysterious,' that is, to those who prefer occult to rational explanations. Mathematicians demonstrated long ago that random distributions of points on the plane normally contain regular patterns and, specifically, linear alignments. And, in general, more than one might expect.

I submitted Ley Lines to Amigo as a game in which some sites on the board were marked by fixed castles, and others were marked by counters randomly distributed across the countryside before play. Each player attempted to visit the most sites in a succession of moves along straight lines. Having reached a site he was 'energized by the power of the vibrations' (or some such pagan gobbledygook) to move on immediately to the next site, if any, without changing direction. Without going into further detail, Amigo quickly bounced the game back to me, with the remark that although it worked as an abstract game they were looking for 'fun' thematic games. In short, it was a 'failed thematic game,' but I think it makes a 'fun' abstract game. Hopefully readers who try it will agree.

Ley Lines can be played by any number of players, but it is not recommended for four or more. The players take movement turns in the conventional way.

The board is a rectangular 18x18 array of hexagons, as illustrated, and the sites are marked by white Go stones before they are reached by a player, and black stones after they have been reached. Each player is represented by a colored ring large enough to fit around a stone and, ideally, the hexagons should be large enough to accommodate the ring. As moves require the ring to be picked up from around stones it should be at least as high as the thickness of a Go stone.

The white stones must first be randomly distributed over the board. Now, in many games where this is necessary it can be a problem because players suspect that it is possible to bias placement to favor one player or the other. This is impossible under the rules of Ley Lines. The number of white stones is not critical, but 54 is recommended as a minimum. More stones produce a longer game. These are shared evenly between the players who then place them randomly so that there are at least six stones in each of the 6x6 zones delimited by heavy lines of the board, as illustrated. These zones are only relevant when placing stones at the start of the game. Placement can be done simultaneously, and timings show that this rarely takes more than a minute.

Having placed the stones, all players may study the layout for one minute, then they place their rings on any vacant cells. The LAST player to place his ring takes the FIRST movement turn, and the FIRST shall be LAST as you might expect. This effectively ensures that no player can set up a pattern of stones exclusively favorable to himself, though in any case no one has discovered how to do this.

There are two types of movement. First a player may move his ring one cell in any direction to or from a vacant cell provided he does not land on top of another player's ring. No stone may be captured in this sort of move. That is important. Second, if a player's ring surrounds a stone of any color he may jump directly to the next stone of any color along one of the principal directions. After the first such 'jump' of his turn, he may optionally continue with further jumps provided he does not change the direction of movement and, again, he must not land on a cell occupied by an opponent's ring. If during a 'jumping' turn his ring starts on, or reaches, a white stone he captures it and replaces it with a black stone. Stones captured by a player must be kept in two piles (small boxes are better). The first pile is for complete lines of white stones captured in a series of jumps, in one turn, which visit every stone in a line, and in which no black stones are visited. These will count double in the final scoring. The second pile is for white stones which do not qualify for the first pile—stones 'mopped up' from lines which have been partially traversed by players' rings. It is important to note that complete lines can only be captured, and so score double, if the preceding move was a single step move.

The game ends when no player wishes to continue, and the scores are then assessed. Each stone in a player's first pile counts as two stones. 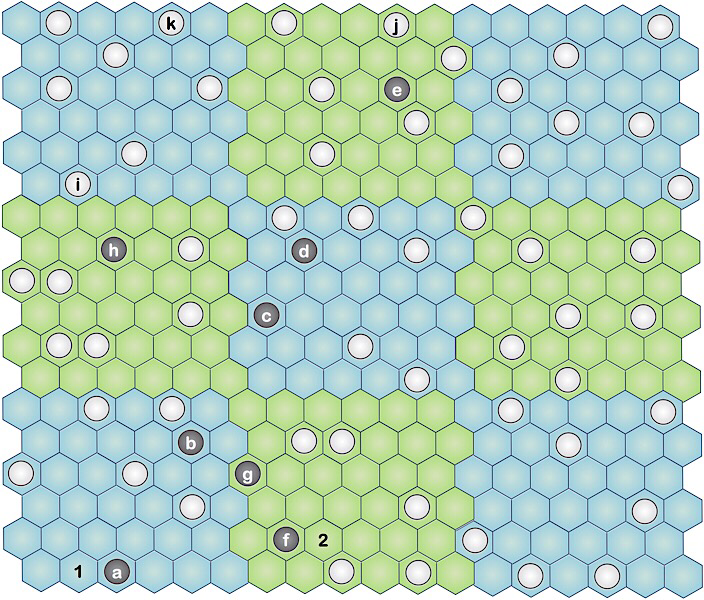 Sample position
In the 2-player game illustrated above 63 stones have been used, and each player has taken two turns. Player 2 placed his ring on the vacant cell marked 2, then player 1 placed his on the cell marked 1. Hence player 1 took the first movement turn, and he single stepped to cell 'a'. Player 2 then single stepped to 'f'. Player 1 jumped from 'a' to 'b' to 'c' to 'd' to 'e', capturing 5 stones which will score 10 because he captured all stones in a line. Player 2 jumped from 'f' to 'g' to 'h', and could have gone on to 'i', capturing all 4 stones in the line. But 'i' appears to offer little opportunity on his next turn. From 'i' he could capture at most one stone. Player 1 has a number of options from cell 'e'. Perhaps the most attractive is to get to cell 'j' in two single-step turns, then capture all stones on the diagonal which passes through the cell marked 1. Would he still choose this route if player 2 had ended his last turn on 'i'? From 'i' Player 2 could jump to cell 'k' on the top horizontal line, threatening to visit 3 stones including 'j' on his next turn. Capture of the white stone on 'j' would put paid to Player 1's hope of capturing all stones on the diagonal from 'j'. However, Player 1 can get to cell 'j' just before this, and then Player 2 cannot land on 'j' because it is occupied by Player 1's ring.

Ley Lines is essentially a route-finding game demanding spatial foresight and accurate assessment of tempo. There is no opportunity to set traps for opponents. Nevertheless, there is considerable player interaction because cutting across opponent's potential lines is a sound tactic.◾️
In AG11 we published an article by Dr. Eric Solomon about his game Entropy. The game article ran alongside an interview with the designer. Eric later submitted the Ley Lines article for Abstract Games. We are honoured finally to present this game to our readers. Eric Solomon has been designing and publishing games since the 1970's, and he is the creator of many original titles, including Conspiracy (formerly Sigma File), Black Box, Entropy (now Hyle), Billabong, and many others. In 1973, he published the book Games with Pencil and Paper, which was highly original in its day. Eric's game Corporation is available from Nestor Games, and Conspiracy (formerly Sigma File) is newly published by Restoration Games.

The coloured board above replaces the original black and white diagram. If the board is constructed from nine modular parts that fit together, it is more compact. In addition, the colours make it easier to see how to distribute the white stones initially. The pieces from a Yinsh set would be ideal, because they flip colours, and there are black and white rings that fit over the pieces perfectly—although a Yinsh set has only 51 pieces, so ideally you would have to find a few extra. ~ Ed.
Next
Table of Contents