On the cover page, we identified games like Jetan, Zhadu, Star Trek 3D Chess, and also Tak, as abstract games with a virtual theme, meaning that they are played in imaginary worlds. In the case of Tak, the world is the creation of Patrick Rothfuss. Tak is introduced in "A Beautiful Game," which is a chapter in Rothfuss's fantasy novel The Wise Man's Fear. Tak, in this world, is supposed to be a game like Chess or Go in our own, with thousands of years of development and deeply embedded in the culture of its world.

The very idea of a game with the same significance as Chess or Go, yet utterly unlike Chess or Go (or any other traditional game in our world) is immediately attractive. Does Tak genuinely have the depth, interest, and playability of Chess or Go?

Tak was designed by James Ernest, renowned author of dozens of games and founder of Cheapass Games. Of Ernest's creation, Rothfuss comments in the Tak Companion Book, "I was stunned. This game is everything I wanted. The rules are simple. The strategy is deep. It's more elegant than chess. It's more lively than go."

The Tak Companion Book is probably the first place to go if you are considering playing Tak. The Companion Book contains the rules of Tak, the story of its evolution in Rothfuss's world, and an evaluation of the cultural and social significance of Tak in this world. Great artwork by Nate Taylor helps to evoke the atmosphere of Rothfuss's books. 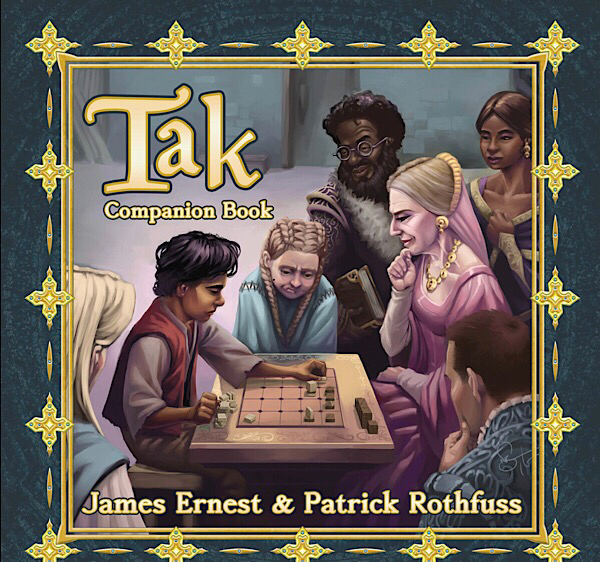 According to the Companion Book,

"Tak is an ancient game, older than empires. For centuries, its simple rules and deep strategies have captured the hearts and minds of players throughout the Four Corners and doubtless into the barbarous lands beyond. It is not for nothing that famed strategist Peyramo Dolsn referred to Tak as 'King of games, and the game of Kings.'"

The rules of Tak are simple, which is a really good start. Tak can be played on squared boards of size 3x3, 4x4, 5x5, 6x6, or 8x8—presumably not 7x7 because of some numerology in Rothfuss’ world. Each player has a collection of flat pieces that are thick enough to stand sideways as well as flat, and one special capstone piece, shaped a bit like a Chess bishop. Effectively, there are three kinds of pieces, flat stones, standing stones, and capstones. The flat pieces can stack and be distributed in a mancala-like way. The objective is to join any two opposite sides of the board with an orthogonally connected chain of your own flat stones, which is called a road. Your own capstone may form part of a road, but a standing stone may not. Standing stones can block, and they can only be flattened by capstones. The complete rules of Tak are given on the site of the US Tak Association (USTA).

In the manner that stacks are moved, Tak is reminiscent of mancala. Obviously, its goal is a connection goal, although both sides can aim to connect in parallel. Unlike, connection games like Hex or Onyx, Tak can be drawn, in that the whole board may be occupied by pieces, although neither player has a road. In these cases, the player with the most flat stones wins, so that the game also has a territorial component.

The appearance of Tak is very attractive, another very good point. I have the University Second Edition set, sold by Greater Than Games. It is a solid little game, although designed only for the 5x5 board—size 6x6 apparently is normal for competition games. Fortunately, it is easy to construct your own set, which is exactly what many Tak enthusiasts do. A fascinating aspect of the Tak culture is the construction of art sets, which players showcase on Reddit, YouTube, and elsewhere. In any case, Tak may be played without a board, imagining the squares, as in the image above.

I have played Tak a number of times, online at playtak.com against robots, and face-to-face with friends. I do not really know how complex and deep Tak is, and whether it can challenge Chess or even Go in this respect. Nevertheless, my sense is that Tak is certainly deep enough, with interesting and varied strategies. In addition, Tak seems to be exactly the kind of game that ought to be an intellectual pastime in some world, and James Ernest’s creation is perfect in this respect. In terms of strategic interest, I would guess that Tak compares favourably with the best of the Gipf series of games, although Tak appears quite unlike anything Kris Burm would have come up with.

The potential interest of Tak strategically and tactically is suggested also by Bill Leighton’s blog, Tak Thoughts, which is approaching 200 blog posts, many of which contain puzzles or discuss Tak strategy. Leighton has written a book, Mastering Tak, Level 1: A foundation for success. The book is filled with material on things like pattern recognition, board evaluation, winning threats, and sample games. For anyone picking up Tak for the first time, the Companion Book and Bill’s blogs and book are excellent resources. For me, one of the great attractions of Tak is the existence of these resources for fueling early study, which immediately make the game interesting. Bill Leighton told me there was a first player advantage in Tak of 59% for the 6x6 game and 66% for the 5x5 game. In tournaments, the players contest pairs of games, and strong players are investigating a handicapping mechanism, should one become necessary. Draws, according to Bill, are rare. Most games end with a player completing a road, although games ending with a full board and comparison of the numbers of flat stones are not uncommon. 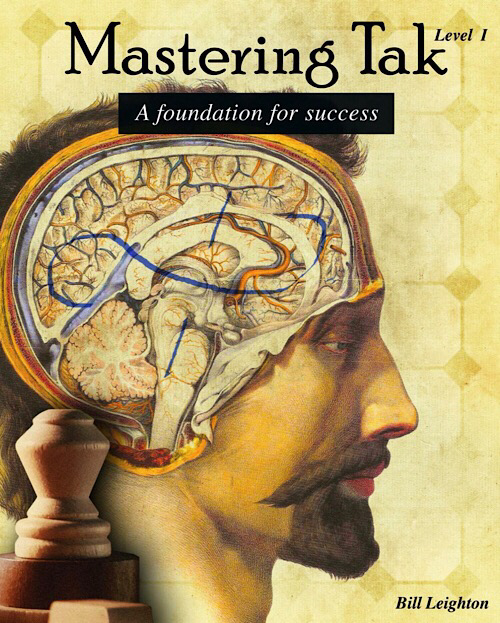 For competition, you may try playtak.com, or the US Tak Association lists several Tak clubs on its website, and organizes tournaments. Nevertheless, these resources are far apart, and in my several visits to playtak.com I have yet to find a human opponent. I would have expected more players online, given the existence of the US Tak Association, the books and other resources, and the excellent game itself. Another option for turn-based play is Discord, although I have yet to investigate.

According to Bill Leighton, most new Tak players are already fans of Patrick Rothfuss. Thus, the direction of transmission is from the fantasy books to the game, rather than vice versa. Perhaps here lies the problem, because the pool of serious new Tak players is thereby limited to the population of Rothfuss fans. To my mind, the game needs to be on one or more of the popular servers, with turn-based as well as real-time options, where it will be exposed to a larger number of potentially serious players. Tak is an excellent game, but no abstract game these days, no matter how brilliant, can take the world by storm. Tak should be competing for attention in the hurly-burly with other modern abstract games, at least in my opinion.

Nevertheless, the virtual theme of Tak is alluring. You do not even have to be a fan of the books. The very idea that Tak is the equivalent of Chess or Go in some other world is an attraction in itself. I highly recommend Tak, whether or not you have read or plan to read the books of Patrick Rothfuss. On its own terms, Tak is an original, beautiful game.◾️

We gave James Ernest the opportunity to respond to the review, and he replied as follows, addressing just the topic of first-player advantage:

It’s almost inevitable that a turn-based game with perfect knowledge will exhibit some advantage for either the first or second player. We expected this in the design, although we didn’t have the player base to estimate it. (Obviously such games have a theoretical perfect solution in which one player always wins, but in the case of Tak we have only found one for the 3x3 board.)

The game has a built-in balancing mechanism, however, in the form of a scoring system. The rules recommend that you should play an even number of games, alternating first player, and keep a total score for the session. Your score for winning is the size of the board (for example, 25 points for the 5x5 board) plus the number of pieces you didn't play. Many variations on this scoring system are given in the Companion Book and other places.

We felt that this type of scoring system was preferable to any additional in-game rules, since there really is no way to eliminate the advantage perfectly.

I will also say that Tak is one of my proudest design accomplishments, and I’m thrilled that so many people are playing and enjoying it. 😀