The Way of Tori Shogi is a book by Dave Brandl and Bill Croke, focusing on the 7x7 Shogi variant, Tori Shogi. Tori Shogi pieces are all named after birds, and the word tori is Japanese for bird. My PDF of the book is dated September, 2016, although a 2nd Edition (2018) is now available.

Tori Shogi was rediscovered and promoted by George Hodges in the 1970’s. George was instrumental in bringing Shogi and its variants from Japan, and attempting to popularize them outside of Japan. The variants, possibly apart from Chu Shogi, were almost unknown to modern Japan, and George had to rely on archival material. I met George several times at Shogi tournaments in the UK in the early 1980’s, and later in the 1990’s when I visited his home to pick up copies of several of the larger Shogi variants. George was a strong advocate for Shogi. His legacy to the world of Shogi and Shogi variants is incalculable. In recent years, Tori Shogi has been played on Little Golem, and has attracted a small group of enthusiasts. Perhaps The Way of Tori Shogi will bring more players to the game.

Throughout the first series of Abstract Games, Shogi variants were covered in almost every issue. We ran a series on the small variant Kyoto Shogi, and also discussed other small games, Poppy Shogi and Renge Shogi. Concerning the larger Shogi variants, we ran a series on Chu Shogi and interviewed Colin Adams about Tenjiku Shogi, games with board sizes of 12x12 and 16x16, respectively. It seems fitting to continue the tradition with a review of Brandl and Croke’s book.

In any case, aside from Shogi itself, Chu Shogi and Tori Shogi are the only historical Shogi variants where actual games have come down to us. George Hodges put together much historical information on Chu in The Middle Shogi Manual, and Dave Brandl and Bill Croke have done something similar here for Tori Shogi—except of course that much less material is available for Tori than Chu. Moreover, The Way of Tori Shogi does not include all available historical material. Further historical material is noted on the Heterodox Chess website, although the links to these games appear to be dead.

Tori Shogi is played on a 7x7 board with 32 pieces. The number of pieces is the same as Chess, with its 8x8 board. The Tori Shogi board is thus crowded with pieces, and hostilities can begin from the first move, with immediate capture or threat to capture. 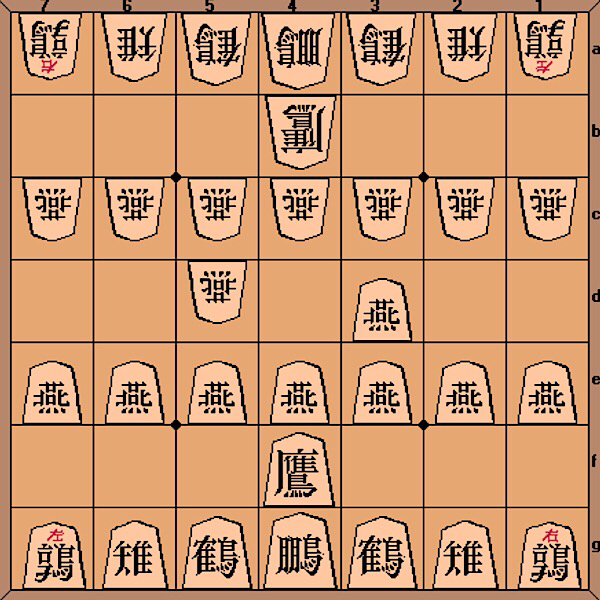 Tori Shogi setup, an image from the book.
Tori Shogi uses "drops," like all the other smaller Shogi games, meaning that captured pieces can return to play on the side of the capturing player. Tori Shogi pieces, in keeping with the smaller board, are not as powerful overall as Shogi pieces. Aside from the Phoenix, which is Tori's equivalent of the Shogi King, none of the Tori Shogi pieces has a direct equivalent in Shogi. The Tori Shogi Swallow moves as a Shogi Pawn, although it promotes differently. Even then, however, a major variance between Shogi and Tori Shogi is that a player can have two of her Swallows on any given file—in Shogi, only one Pawn is allowed on a file. This distinction alone would give Tori Shogi quite a different feel to its larger cousin Shogi.

This chapter, which draws inspiration from 'The Earth Book' in The Book of Five Rings, contains a general discussion of strategy, alongside a history of Shogi and Tori Shogi.

Cho-Yo, Japanese artist, philosopher, and Shogi player, was the first person to introduce Shogi to the West (nearly 100 years before George Hodges!). The authors cite Cho-Yo as follows:

"This Japanese Chess, thus improved, is the most highly developed, most interesting and most scientific and philosophical of all the games ever invented and known. It plainly illustrates the secret intricacies and combinations and permutations of causes and effects of every human affair as a factor of nature. Playing this game cultivates business tact, keeps up strategy and tactics, improves diplomacy and strengthens the mental faculties."

Of course, these comments apply to Shogi, although I am sure the authors mean them to be applicable to Tori Shogi, too.

The authors discuss the strategy of Tori Shogi in the most general terms, putting particular emphasis on the importance of timing and the initiative.

'The Water Book' chapter contains the full rules of Tori Shogi. However, the authors go well beyond the rules, with a discussion of the tactics associated with each piece. For example, the writers say of the Falcon,

"Beware of the temptation to take easy Swallows early in the game, as this can lead to trouble. The Falcon, with no direct backward move, may become trapped and lost early, as with the Septic Swallow gambit, described in The Fire Book."

To my mind, any game with a "Septic Swallow gambit" deserves a closer look. The "Septic Swallow" example points to a particular line in the opening, but many other examples are not sourced from specific game situations. The reader needs to turn to the annotated games in 'The Fire Book' to see the principles of Tori Shogi played out.

The core of the volume, and the longest chapter, is 'The Fire Book.' It contains a wide ranging discussion of strategy and tactics, including three closely annotated games. A strength of the book is the bringing together of these games, one from early nineteenth century Japan and two from modern tournaments involving strong players. The commentary is very clear, with enough diagrams to permit following through a game without having to set up the board.

Castles are a big part of Shogi strategy. The authors discuss castles in Tori Shogi, the first time I have seen anything like this. In particular, they include a sample game illustrating the Tori Shogi version of the Bear in the Hole Castle.

The chapter finishes with a discussion of Musashi’s 25 principles of strategy, and their application to Tori Shogi.

'The Wind Book' chapter presents a number of other Chess-type games, including Chess, Shogi itself, Chu Shogi, Mini Shogi, Makruk, Xiangqi, and Changgi. They all have lessons for Tori Shogi—as does even Sumo, according to the authors.

'The Void Book' is Musashi’s discussion of philosophy. Perhaps it has no direct connection with Tori Shogi, although the authors cite it quite extensively. In particular,

"You win battles with the timing in the Void born of the timing of cunning by knowing the enemies' timing, and thus using a timing which the enemy does not expect," and, "Enact strategy broadly, correctly and openly. Then you will come to think of things in a wide sense and, taking the void as the Way, you will see the Way as void. In the void is virtue, and no evil. Wisdom has existence, principle has existence, the Way has existence, spirit is nothingness."

Is this sound advice for all players of abstract games and not just Tori enthusiasts?

The book finishes with appendices, with more information about the other Shogi variants, a list of Japanese phrases, and acknowledgements.

The use of The Book of Five Rings to structure a book on Tori Shogi seems quite appropriate. However, much of the contextual material in The Way of Tori Shogi, involving philosophy, other games, and so on, has nothing overtly to do with Tori Shogi. I suppose the authors had to find some manner to float the sparse material resources because not a wealth of information is available about Tori Shogi. Nevertheless, as mentioned above, there are more historical games indicated on Heterodox Chess; and there are players and games on Little Golem, for example. Perhaps the authors should have mined these resources for one or two more annotated games and some problems.

On the other hand, situating Tori Shogi within Japan's world of the samurai provides Tori Shogi with a virtual theme. It anchors Tori Shogi to an era of legends, stories, and philosophies that have great emotive power. Perhaps this is not a bad way to attract new players. The authors have done a good job of bringing together some information on Tori Shogi, and they have highlighted the history and significance of Tori Shogi. Anyone with a remote interest in the Shogi variants should take a good look at this book, it is unique.◾️

A PDF of The Way of Tori Shogi can be purchased for US$15.
Next
Table of Contents