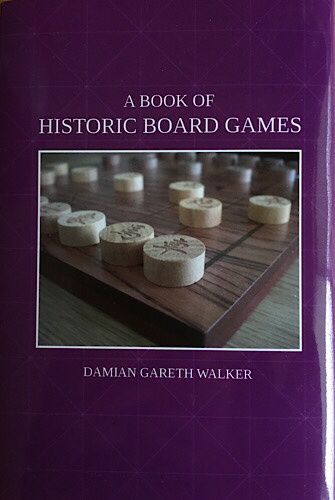 Reviewed by Kerry Handscomb
Damian Gareth Walker's A Book of Historic Board Games (2014) is book about 12 traditional games from around the world: Parchisi, Halma, Agon, Tâb, Fanorona, Nine Men's Morris, Wari, Konane, Xiang Qi, Tablut, Asalto, and Renju. For each game, the author covers the game's history, its rules, and some pointers on strategy.

Damian's book most closely resembles R.C. Bell's Board and Table Games from Many Civilizations (1979) or perhaps his Discovering Old Board Games (1980). Bell was a ground-breaker, and I suspect he was the book's inspiration. Nevertheless, I have not always found Bell's rules for games to be perfectly clear, and A Book of Historic Board Games is much better in this respect. The strategy advice, moreover, is what sets the book apart and makes it most useful to game players. The author admits he is not expert in any of the games and that he often had to rely on other sources. Nevertheless, a few ideas about the strategy and tactics can make exploring a game that much more enjoyable—and can make it much easier to decide which games to focus on.

I came to A Book of Historic Board Games from David Ploog's comments on Agon in AG17, and perhaps the book is worth getting for Damian's description of Agon alone. Several other games jump out at me. I already know Wari quite well, and Mike Sandeman's article on Tablut in AG16 is already a really good presentation of this interesting game. We discussed Halma, or rather the serious and competitive Super Halma, in AG15 and again in this issue; Nine Men's Morris was covered in AG13; we published a long letter with much information about Konane in AG12. On the other hand, although I have known about Parchisi and Tâb for many years, I had never considered them to be on the same level as Backgammon and its family of related games. Damian's description, however, indicates that they may be interesting games in their own right and worth playing. I plan to try Tâb some time soon, just because of Damian's book.

Damian has chosen worthwhile traditional games that are little known outside their native cultures. In addition, the games he has selected are generally difficult to approach for new players outside these cultures, mainly because of the lack of easily available written material. The exceptions, of course, are Xiang Qi and Renju. Xiang Qi is reputedly the most played game in the world, and much material is already available in English for study. Renju has a professional player class, and although less material is available in English about Renju, Goro Sakata and Wataru Ikawa's Five-In-A-Row (Renju) for Beginners to Advanced Players is a classic republished by Ishi Press in 2010. Instead of Xiang Qi, I may have selected one of the more obscure regional chess variants; perhaps instead of Renju, I would have chosen an unusual regional checkers variant—for otherwise the huge family of checkers games is unrepresented.

Nevertheless, the choice of games is a small quibble, and Xiang Qi and Renju are both world games that are little known by many potential players. These games deserve an introduction.

A Book of Historic Board Games has been around for five years already, and it is a obviously a classic of its kind in the making. If you are the type of person that reads Abstract Games, and you have not yet dipped into this book, you should get hold of it as soon as you can! ◾️

A Book of Historic Board Games by Damian Gareth Walker can be ordered via print on demand from Lulu.
Next
Table of Contents