In the original series we often included a board design on the back cover, for people to try a game. The boards were necessarily small, and players had to find their own pieces. More recently, the whole category of print-and-play games has arisen, of which hundreds exist on BoardGameGeek. Our early efforts may be characterized as proto-print-and-play games. However, perhaps a first experiment in ready-printed boards was The Boardgames Book by R. C. Bell in1979, containing some 25 game boards, including Agon. Then in 2001, Michel Boutin published Jeux de pions pour aujourd'hui, which consisted of 12 game boards for vintage games along with a book containing rules and commentary on all 12 games (reviewed in AG9). Agon was one of these 12 games—see the image at the bottom of this page. The feature below is experimental for this format of Abstract Games. We again present Agon, with a board PDF, typical of our old series. Agon deserves attention for several reasons—see below!
The information on Agon here comes from David Parlett's article in The Oxford History of Boardgames. Agon is very probably the oldest abstract game with a board space consisting of hexagons rather than squares. It may have been developed in France, in the 1780's, a little before the French Revolution, as there is evidence of the existence of Agon boards in France at that time. The first actual rules for Agon, however, do not appear until 1872, in Victorian England. My guess is that Agon was a game of the French aristocracy that did not survive the Revolution. The appearance of Agon in England is roughly contemporary with other Victorian-era games, such as Halma and Reversi.

Agon board.
The board PDF can be downloaded, and Chess Queens and Pawns would be ideal for the pieces.
The starting position is shown in the diagram below. Each player has six Guards of her colour, and one Queen, marked with a sun in the diagrams. The players take turns to move one of their own pieces. In a regular move, a piece is moved to a vacant adjacent space, with the proviso that no moves can be made away from the centre of the board. Thus, a piece can move "sideways" to a space of the same colour, or towards the centre to an adjacent space of a different colour. A player is not permitted to move a piece so that it is sandwiched between two pieces of the opposite colour, so that the three pieces together form a straight line. The objective is to move your six Guards and Queen to achieve a position at the centre of the board, as shown in the second diagram below.
On the other hand, it is quite permissible to move oneself to trap an enemy piece between two of your own pieces in a straight line. If a player does have one or more of her own pieces trapped in this way, when it is her turn to move, she must move to rescue these pieces. A Guard, when rescued, must be moved to a vacant space on the periphery of the board; the Queen can be moved to any vacant space, even the centre space. (Obviously, it may be good to have your Queen trapped, because you may reposition the Queen favourably.) Of course, these rescue moves cannot place a piece so that it is sandwiched between two enemy pieces. A single move may trap several enemy pieces, in different directions. With more than one piece trapped, the player must use successive turns (while the opponent takes regular turns in between) rescuing the trapped pieces. If the Queen is trapped, the Queen must be rescued first, before any Guards. If a player creates a position where her six guards surround the centre space, without her Queen in the centre, the player loses. For an alternative start, with more variety, the players first take turns to place their pieces on any vacant spaces on the periphery, starting with the Queens.◾️

David Ploog kindly submitted the following addendum, with some ideas about Agon:

According to the classification I presented in Goals in Abstract Games, Agon is a traversal game because to win you need to get all of your pieces to a goal zone. However, Agon differs from other traversal games such as Halma or Chinese Checkers in that both players share the same goal zone. This makes for tense matches of a unique nature. For example, the shared goal zone enforces a form of direct interaction which, in Agon, is given by relocation of pieces when they are trapped. Also, there is no Halma-style endgame where pieces of different colour cannot interact even indirectly. By the way, from the point of view of evolution of board games, it is interesting to observe that Agon’s pincer traps are in direct line from the custodian capture of Greek Pettaia, Roman Latrunculi and Norse Tafl games.

However, Agon is not just a ludo-historical or theoretical curiosity. It is a fun game in its own right, providing intriguing choices and is certainly worth exploring more deeply. Chapter 3 of the book Historic Board Games by Damian Gareth Walker (2014) is devoted to Agon. After explaining the rules, he presents a collection of stratagems, including diagrams. Here, I just cite some of his hints.

First, collective development of your pieces is often better than initial tempo gain. Do not blindly rush towards the centre! Second, try to keep your pieces together, both for offensive and defensive purposes. Do not trap your opponent’s pieces only because you can! In the early stage, relocation might even benefit your opponent more than you. Instead, aim to set up chains of trappings where you can pincer piece after piece, with your opponent busy placing her trapped pieces on the boundary. Finally, especially later on, blocking becomes important! Try to impose roadblocks for your opponent by setting up “empty” pincers. 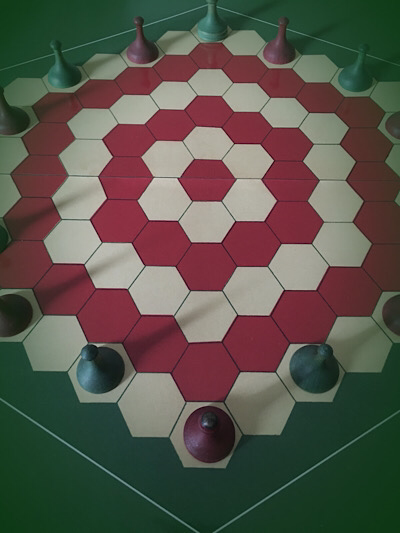 Detail of the Agon board from Michel Boutin's Jeux de pions pour aujourd'hui (2001), with Camelot pieces.
Next
Table of Contents