Reviewed by Kerry Handscomb
The push games depend on eliminating opposing pieces from the board using various kinds of "push" mechanism, reminiscent of sports such as Sumo. The most famous push game is Abalone, published in 1987. Another popular push game is Siam, published in 2005, although the objective here is to push a neutral "rock" off the board rather than an opponent's piece. The only other games I can think of in the push sub-genre are Push Fight and Shōbu, both reviewed here. There must be more, and I expect to be corrected by readers!
🔶🔶🔶
Shōbu

Shōbu is a new game, designed by Manolis Vranas and Jamie Sajda and published by Smirk and Laughter Games in 2019. The equipment for Shōbu consists of four 4x4 wooden boards, 16 polished stones (eight dark and eight light), and a length of rope. The setup is shown below. 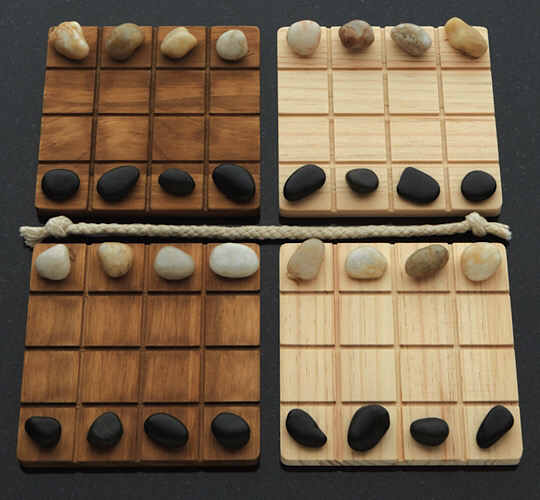 Shōbu setup, from publisher's website.
The components are attractive, where the atmosphere of the game recalls driftwood and pebbles on a beach. The rope takes no part in the game at all, except perhaps to reinforce the beach atmosphere with a piece of flotsam. I have no problem with this eccentric add-on, although I suspect most players will leave the rope in the box after a couple of games.

That is it! The game plays as a fierce melee, with players pushing opposing pieces off a board with most moves after the opening. Shōbu reminds me a little of Fanorona in this respect, where after the mass destruction of the opening and middle-game, the play settles into an endgame of quiet calculation. In my experience of Shōbu, however, we have tended to blunder into the endgame, where one player or the other has a quick win. Maybe we should be calculating more before the endgame, so that specific structures that are advantageous may be selected ahead of time.

​No one has published a strategy guide at this time. And, to be honest, after playing the game extensively, neither the designers nor I can identify stronger openings, first or second player advantages, or the other typical things you’d expect.

We are about to do some machine learning on the game. The app developers have all said the AI for the game is an Everest-like challenge, so one friend is going to try machine learning to see if a machine can eventually detect what most humans may not.

But, here are some more obvious strategies and insights:

• It is almost impossible to play defensively, and play well, in the beginning of the game. You will lose stones, lots of them, and that seems to be okay. The effort to play defense immediately leads you to ignore opportunities to remove your opponent’s stones and doing so is most definitely a better strategy. Always remove stones when you can, unless a particular move would lose you the game.
• Placing your stone between opponent stones is a great way to claim a stone without losing your attacking stone immediately after.
• Corner spaces are more vulnerable and harder to escape.
• It is often hard to win on the first isolated stone. Often placing a player in double jeopardy on two boards is necessary.
• Balancing your movements across all four boards is key to success. If too aggressive on a set of boards, your stones will eventually become locked down and unable to move effectively to capture. Losing all ability to move in a certain direction becomes a problem in the late game if you have not kept your pieces fluid from board to board.
• By the same token, identifying where your opponent is unable to move and placing your stones where they cannot shove them is an excellent strategy.

Curt has condensed much strategic advice about Shōbu into these few terse sentences. Is this enough for us to start making sense of Shōbu, or is it always going to be a wild melee? Either way, Shōbu is fun to play.
🔶🔶🔶
Push Fight

Push Fight, designed by Brett Picotte, was published by Brettco Inc and Penny Arcade in 2008. According to the website, the game is over 25 years old, meaning that it dates back to the early 1990's. However, Push Fight is not well known, and perhaps it ought to be, which is why we are reviewing it here.

The board for Push Fight consists of 26 squares, with raised runners along the left and right sides. The shape of the board is rotationally symmetric with additional edges and corners at each end that provide tactical and strategic interest. 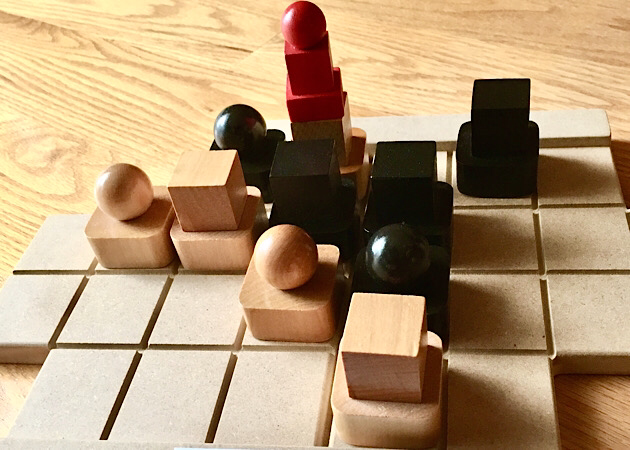 Push Fight game, White about to win.
Each player has five pieces, three with flat tops and two with round tops, and the players share a single red anchor piece. The wooden pieces are large and pleasant to handle; they are so finely finished on the bottom that they are smooth to touch and glide easily over the board. The anchor piece fits perfectly on top of the flat-topped pieces, but obviously does not stand on the round-topped pieces—which is exactly in accord with the rules. The design of the components matches the rules very well. Indeed, the components are a good example of poka-yoke, or mistake-proof design. Cameron Browne wrote a great article about this quality of games, “Embed the Rules," in Game & Puzzle Design. As a physical object, this game is brilliantly put together and a joy to handle and play.

The rules for Push Fight are very simple. To start with, a player can make up to two positioning moves, where her pieces may be slid any number of spaces over orthogonally connected squares, without jumping and without pushing. Then, she must make a push move with one of her flat-topped pieces. The push move pushes a line of connected pieces of any length. The pushed pieces may be of either colour and of either piece type. If a player's piece is pushed off the board, that player immediately loses. When the move is complete, the red anchor piece is placed on top of the piece doing the pushing. This "anchored" piece cannot be pushed in the opponent's next turn.

Push Fight plays extremely well. There is plenty to think about, because the two positioning moves can provide varied options. The shape of the board with the side runners seems ideal. The sides are relatively safe, but the irregularly shaped ends of the board are dangerous and provide opportunities for tactical threats. Despite the fact that Push Fight is a small game, with only five pieces per side, it is by no means trivial. I suspect that it has considerable depth and interest. And it is fun to play and push around those big wooden pieces! My single issue with Push Fight is that I would prefer a less descriptive name, although naming is a personal preference that in no way detracts from this excellent game.

Push Fight is an amazing game. How did we miss it? ◾️
🔶🔶🔶
All the push games are interesting. The push mechanism is intuitively very nice, and as straightforward and obvious a goal as connection or capture. Perhaps games like Push Fight are too small to accommodate narratives, but surely the goal is a primal metaphor, as with the sport Sumo and the children's playground game King of the Mountain—see David Ploog's article in this issue. The surprising fact is that there are not very many other push games around. I highly recommend Shōbu and Push Fight.
Next
Table of Contents